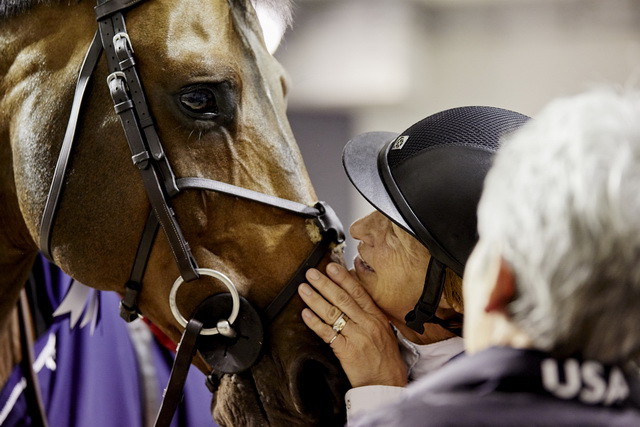 Double Olympic champion Beezie Madden of the United States took a quick step towards replicating her Longines World Cup Show Jumping Final of five years ago as she and her horse Breitling LS won the opening speed competition of the 2018 Final in Paris.

Madden, one of four women in a field of 37 starters for the International Equestrian Federation’s (FEI) flagship event, gave her 12-year-old stallion a spectacular ride in the AccorHotels Arena.

She finished almost a second clear of Daniel Deusser of Germany, another past winner, riding Cornet d’Amour.

🥇 Beezie Madden/ @JohnMaddenSales & Breitling 🇺🇸
🥈 @DanielDeusser & Cornet d'Amour 🇩🇪
🥉 Devin Ryan & Eddie Blue 🇺🇸
What a start to the @LonginesEq #Jumping #FEIWorldCupFinals with a storming round from Beezie to take the lead 31 years after she last competed in Paris! pic.twitter.com/VOfjXuV0Bq

Madden was happy with her result having mastered the balance between speed and risk over the clever 13-fence course set by Spain’s Santiago Varela better than all the rest.

But none of those at the head of the leaderboard have any room for complacency, because stalking them is three-time title-holder Marcus Ehning from Germany, who finished fourth with Cornado NRW, while one of the most talked-about partnerships ahead of these Finals, Sweden’s Henrik von Eckermann and Toveks Mary Lou are close behind in fifth.

All is set for a hugely competitive sequence of tests ahead of the finale on Sunday (April 15).

After the speed, tomorrow’s test will be all about power.