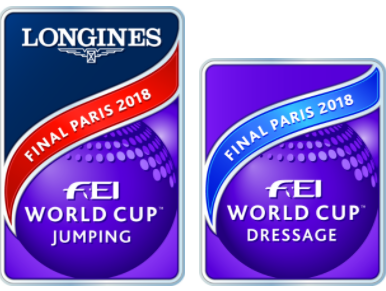 Qualified from Leagues right across the globe, Olympic, World and European champions are amongst the representatives from 24 countries hoping to claim the prestigious titles in front of 60,000 people at the AccorHotels Arena.

Defending champion Isabell Werth of Germany, accompanied by French rider Ludovic Henry, matched the starting numbers and names for the first leg of the dressage finale on Friday (April 13).

Sweden’s Henrik von Eckermann was joined by Olympic team gold medallist Roger Yves Bost from France to select the order-of-competition for tomorrow night’s opening Jumping competition in which America’s McLain Ward is also due to begin the defence of his title with his mare HH Azur.

This will be just the third time that France has hosted these competitions since their creation in 1979 and 1985.

Henry did not do his chances any harm when pulling out his own name as last to go in his opening event.

"It’s been our dream for many years to bring these Finals back to Paris and now at last our dream has come true,"said show organiser Sylvie Robert.

"it’s an honour to be here in Paris, home of the Olympic Games in 1900 and 1924, and of course 2024, but also the home of so many other great sporting moments," FEI President Ingmar de Vos said.