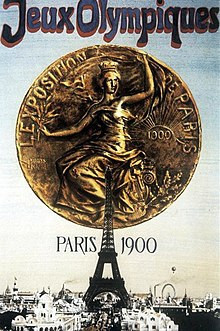 Women allowed to compete but Olympics reduced to a minor role

The 1900 Olympics were held in Paris after Baron Pierre de Coubertin rejected calls from many for the Games to be sited permanently in Athens following the success of the inaugural Games.

They were held in conjunction with the Paris world fair because de Coubertin believed it would help raise the awareness of the Olympics. It was an error of judgement because the events were stretched out over a five-month period and some athletes were not even aware they were competing in the Games.

The fact the winners in each event were not awarded medals, but rather cups and trophies compounded this.

But the Olympics were significant because, unlike in Athens four years earlier, women were allowed to compete in some events. The honour of being the first female Olympic champion fell in the tennis to Britain's Charlotte Cooper, who already had won three of the five Wimbledon titles she was to collect during her career.

The fact professionals somehow got to compete in a number of events, including in the fencing where France's Albert Ayat, winner of the epee, was awarded 3000 francs for his victory, illustrated the chaotic nature of these Olympics. Baron de Coubertin was not pleased.