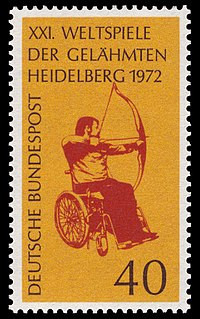 The International Stoke Mandeville Games Committee had planned that the Games would take place in Munich following the Olympic Games, but the Munich Olympic Village was closed after the Games and converted into private apartments.  With no suitable accommodation for the Paralympic athletes the city of Heidelberg stepped in and invited the organisers to stage the Games at the University's Institute for Physical Training.

The Heidelberg Games saw the inclusion of different disability groups and exhibition events such as Goalball and the 100 Metre Sprint for the visually impaired, allowing visually impaired competitors to participate in the Games for the first time.

The Men's Wheelchair Basketball was perhaps the highlight of the Games and a capacity crowd of 4,000 watched as the United States scraped past defending champions Israel 59-58 to take the gold by a single point.

Heidelberg 1972 was a fantastic Games that saw the hosts West Germany top the medal table ahead of the USA and Great Britain.

It was at the Heidelberg Games that the idea of a 'Beer Tent' for all participants was started.  The Beer Tent, a big marquee set up at the Rehabilitation Center, became a focal point for informal evening entertainment.  This tradition was to follow in future annual International Stoke Mandeville Games and the Paralympics of 1976, 1980 and 1984.

Following the Heidelberg 1972 Games, coaches and trainers discussed the need to develop and refine the sports rules for each event.  Sub-committees were created for each sport in the International Stoke Mandeville Games.  The creation of the sub-committees led to more self-determination in the Paralympic movement, especially in the development of wheelchair sports.