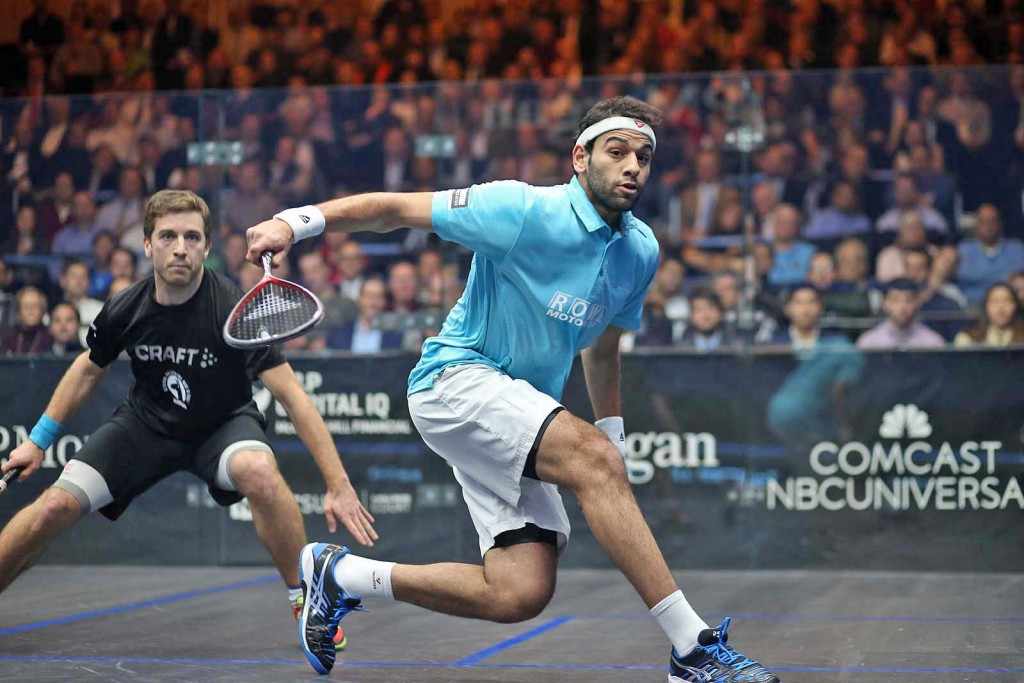 Title holder Mohamed Elshorbagy moved through to the final of the men’s J.P. Morgan Tournament of Champions after a commanding victory over France’s Mathieu Castagnet at Grand Central Terminal in New York City.

The Egyptian controlled the early stages of the match, forcing Castagnet into the front corners of the court before stepping up to punish the seventh seed on the volley.

After falling 2-0 behind, Castagnet cut the deficit to a single game by drawing out some errors from his 25-year-old opponent.

But a series of punishing rallies saw the hard-hitting Elshorbagy take control of the match once more in game four and he held off a late attempt at a comeback from the Frenchman to see out an 11-9, 11-6, 3-11, 11-7 triumph.

"He [Castagnet] is a great competitor," said Elshorbagy, the world number one.

"He’s been making so much progress lately and has made it into the top eight and then played in his first ever World Series final.

"He is an inspiration to all players on how they should work hard in their career because he has worked so hard.

"To be able to make it to the semi-final here is such a great achievement and I’m really happy for him.

"We played such a great match together - we always do.

"I’m really happy for him and I want to congratulate him."

Last year’s runner-up Nick Matthew will meet Elshorbagy in a repeat of the 2015 final after a serious injury to his semi-final opponent, world champion Gregory Gaultier of France, handed the Englishman the win.

The match began on an even keel with the crowd looking forward to some exciting squash between the two players who had battled against each other 33 times previously on the Professional Squash Association (PSA) World Tour.

However, with the score level at 3-3, Gaultier rolled his ankle after contact with Matthew and was carried off the court in real distress.

Despite receiving treatment, the Frenchman was unable to continue the match to ensure Matthew’s progression.

Meanwhile in the women’s event, the United States’ Amanda Sobhy moved into her first-ever PSA World Series final with a scintillating victory over Egypt’s Nouran Gohar.

Sobhy, who yesterday became the first American-born woman to reach the last four of the competition, started on the back foot after a fast start from Gohar saw the 18-year-old rattle off a number of early points.

But roared on by a partisan crowd, the US number one and world number eight battled back and came out on top after a multitude of frenetic rallies, seizing the win with an 11-9, 11-9, 12-10 margin of victory.

Egypt’s Nour El Sherbini will go head-to-head with Sobhy in the final after she produced a sensational display to down 2014 champion Nicol David of Malaysia.

The 20-year-old came through a brutal five-game encounter with world number four Camille Serme of France in the previous round, but she showed no signs of fatigue as she pounced on any loose drops from David to claim an 11-8, 11-5, 11-6 success.

Both the men’s and women’s finals are scheduled to take place tomorrow.