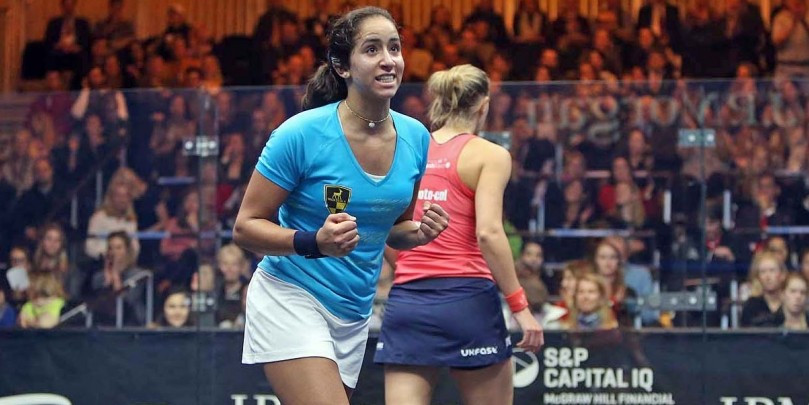 Egypt’s Nouran Gohar caused the upset of the day at the J.P. Morgan Tournament of Champions at Grand Central Terminal in New York City after overcoming world number one Laura Massaro to secure a semi-final spot.

It also added Massaro’s name to the Egyptian’s list of scalps this season, which includes Malaysian superstar Nicol David and world number four Camille Serme, who she beat at last year's China Open in Shanghai.

"I’m so, so happy, I can’t feel anything right now," said Gohar.

"Laura is the world number one and she beat me six times before so to beat her 3-2 in a very tough match like this is awesome.

"It’s unbelievable for me.

"Laura is so strong.

Gohar’s win was one of a number of surprise results that lit up the quarter-final stage of the women’s competition with the United States’ Amanda Sobhy also catching the eye, overcoming Alison Waters, England’s second highest-ranked player behind Massaro.

Sobhy, the US number one, will meet Gohar in the semi-finals after she achieved an impressive straight games victory over last year’s runner-up.

Both players traded some fine drop shots in an even start to the match before Waters pulled away to amass three game balls at the end of game one.

Sobhy battled her nerves though and came back with a number of thunderous drives to take five points on the bounce and move into a one-game lead in front of a partisan crowd.

From there, the triple Toronto 2015 Pan American Games gold medallist dominated the fixture and swept to victory in the final two games to wrap up a 12-10, 11-3, 11-9 victory in 38 minutes and become only the second American-born woman to reach the last four of the Tournament of Champions.

Meanwhile in the men’s event, Nick Matthew had to call on his vast experience to recover from a 2-0 deficit and defeat Egypt’s Marwan Elshorbagy, keeping alive his hopes of adding to the title he last won in 2012.

An irresistible display from Elshorbagy in the first half of the match looked poised to hand the 22-year-old his first victory over the Englishman.

But "The Wolf", as Matthew is known, roared back with a performance that embodied the mental resilience that has personified his career, taking the match 10-12, 7-11, 11-7, 11-6, 11-6 to move on to the semi-final where he will meet long-term adversary Gregory Gaultier of France.

Top seed Mohamed Elshorbagy of Egypt is due to meet France’s Mathieu Castagnet in tomorrow’s other last-four encounter.