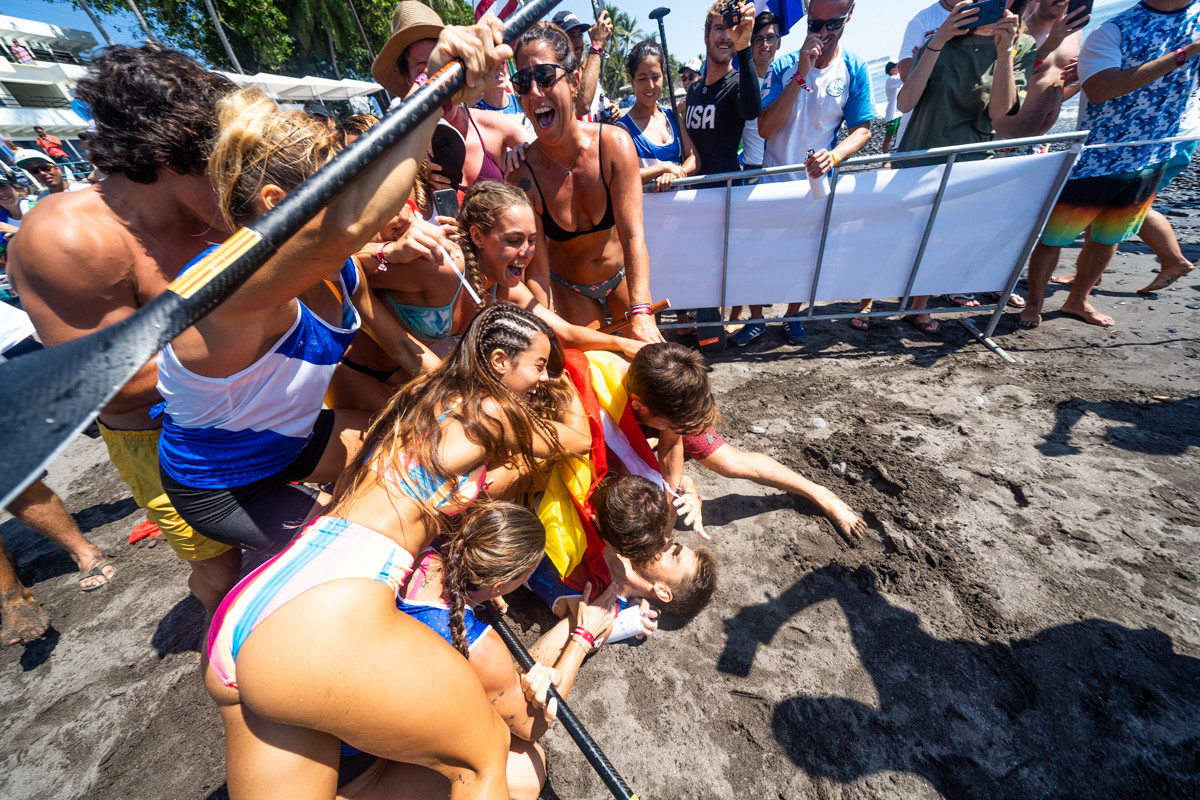 The quartet of Carlos Antonio Ruiz, Susak Molinero, Itziar Abascal and Rafael Sirvent rode their luck as the surf developed at El Sunzal beach, before Sirvent edged clear to seal gold in the closing stages.

"For us we are used to racing France and we know everyone really well," said Ruiz of Spain's podium-topping race.

"We were so close and in the SUP we did a really good job and we did a perfect race here in the perfect conditions.

"I must say thank you to all the team because we are four here, but we are 18 and they can all do the same."

In the technical relay event, prone men lead off the field before passing over to a SUP woman.

The third leg is contested by a prone women's paddler, before the SUP men complete the race with a final dash for the line.

The French crew of Julen Marticorena, Amandine Chazot, Camille Rosa Perotteau and Martin Vitry were leading by almost a length at the halfway stage, with Chazot pushing Molinero all the way.

But Abascal grabbed the initiative on the third leg and Vitry was helpless to deny a Spanish victory, as Sirvent surged back to the beach on the crest of a wave to clinch gold.

The United States earned a valuable bronze in their quest for the overall team title as Japan collected the copper medal.

Earlier in the morning, Vitry won the first semi-final of the men's individual SUP technical races to qualify for tomorrow's final.

He was followed home by Peruvian Itzel Delgado and US star paddler Connor Baxter.

The second semi-final saw a five-way battle for the race win, with the top six progressing to the final.

A fierce contest saw Italian Leonardo Nika cross the line first, with Titouan Puyo of France, Vinnicius Martins from Brazil and Denmark's Christian Andersen all finishing within eight seconds of him.

"It was tough against the best of the world," said Nika.

"I'm having so much fun here and I love the waves - it is the best feeling."

The Italian will go for gold tomorrow, but said he enjoys the all-around nature of the technical races.

"My best goal is to surf and I love to not only think about canoeing or straight line," added Nika.

"Everything is changing in this water and there are bumps and occasions you have to take advantage of.

"The little waves can make such a difference so SUP is not just racing, it's waves, surfing, sprinting and everything.

"You have to do everything and it makes it the best competition."