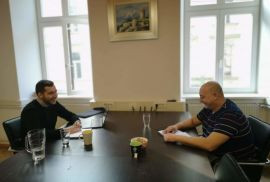 WAKO played a major supporting role in this year's EUSA Combat Championships in the Croatian capital of Zagreb, with 1,237 participants from 404 different universities and 36 countries taking part.

The programme involved kickboxing for the first time.

Meeting with Aliti in Ljubljana, Bugarcic expressed his pleasure at the sport's debut at the competition after 107 male athletes and 67 females participated.

The meeting continued with discussions around future joint activities and co-operation, with high expectations ahead of kickboxing's first showing at the European Universities Games in Belgrade next year.

Thereafter, Zagreb will again play host to the 2021 EUSA Combat Championships, where an even bigger field of kickboxing participants are expected.

EUSA and WAKO signed a Memorandum of Understanding with each other in November 2017 and have since worked in close collaboration.