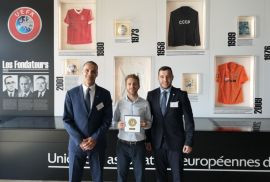 The European University Sports Association (EUSA) has held what it describes as a "positive introductory meeting" with UEFA at the European football governing body’s headquarters in Nyon in Switzerland.

The point of discussion in the one-day meeting was a potential collaboration in the organisation of future EUSA football and futsal events as well as a possible educational partnership on topics such as dual career, anti-doping, fair play promotion and other projects.

Following its conclusion, both parties reiterated their desire to formulate concrete plans on areas of collaboration.

This is with the view to defining the next steps in working towards a Memorandum of Understanding between the two organisations.

EUSA has implemented a number of fair play strategies in recent times.

The video assistant referee was introduced at the 2019 European Universities Football Championship, following on from the fair play "Green Card" being brought in at the 2017 edition of the event in Porto in Portugal.