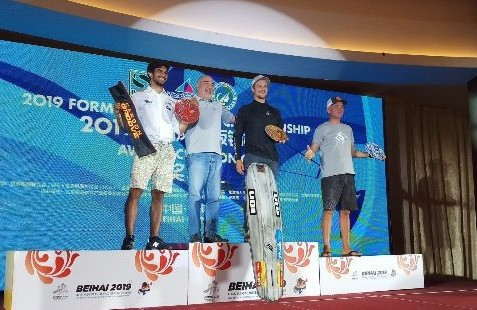 A lack of wind and impending bad weather caused a premature end to the 2019 Formula Kite Asian Championships in Beihai in China.

Today was due to be the final day of competition, with Russia's Denis Taradin leading the male division and 14-year-old Polish kite surfer Magdalena Woyciechowska at the top of the women's standings.

As a result, Taradin and Woyciechowska maintained their positions at the top of the standings by default.

It would be hard to argue with Taradin deserving to come out on top in the men's racing however - he won 12 of the 16 races that were able to take place, maintaining his position of number one in the world rankings.

Italy's Mario Calbucci, winner of three out of the other four races, came second, and Turkey's Ejder Ginyol  was third.

"It was a great regatta," Taradin said.

"I can’t remember the last time we had 16 races, so it was nice. It was good racing.

"I felt for me it was extreme because of the light wind, but with my experience I could make it work even in 5 or 6 knots when it was difficult for the others. I’m pleased with the result."

They benefited from early leader Jingle Chen, competing in her home tournament, failing to finish in the later races as she struggled in the light wind.

"It hasn’t really sunk in yet.

"I had many second places and Jingle Chen was good, but unlucky when her kite went down.

"It’s so important to be consistent."