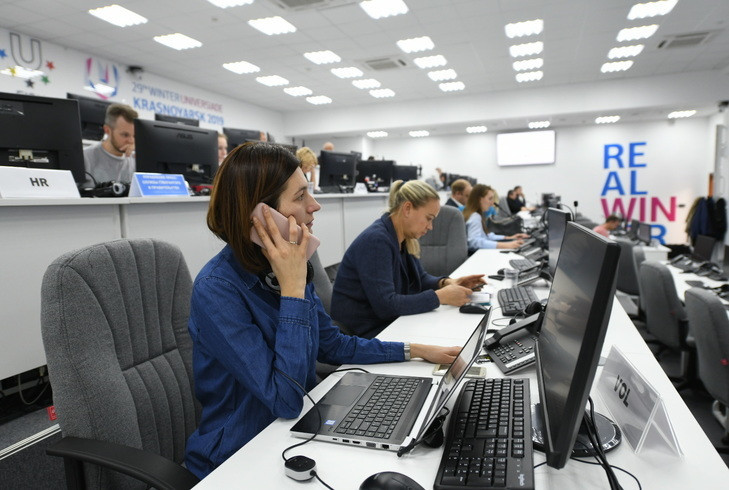 The Centre - which is based at the Siberian Federal University - houses around 60 staff members including Universiade organisers, local Government officials and law enforcement officers.

It is equipped with a "video wall" which features several screens broadcasting a live feed of scenes from across the city.

This was used during the Student Hockey Challenge to test how it will work during the Winter Universiade in the Russian city in March.

According to Universiade organisers, the wall will allow them to "follow the competition participants moving around Krasnoyarsk, the spectators moving in sports arenas and much more".

The technology will also be used for video conferencing with staff at the venues.

"The Winter Universiade 2019 is a reason to use the newest technologies," said the director general of the event, Maxim Urazov.

"A modern format for large project managing is applied at the MOC, when in one operations centre information is collected from all areas of the Games.

"This experience was used at the Olympic Games in Sochi and during the 2018 FIFA World Cup.

"We are in touch with each venue and a number of management decisions are made as soon as new information becomes available."

Vladimir Kolmakov, the acting rector of the Siberian Federal University, added: "The MOC is located in a large amphitheatre lecture room in one of the buildings of the university.

"The room was overhauled by the University and given to the contractor to install the equipment.

"Now it is a unique centre for 55 workplaces with high-tech equipment.

"We hope that all this will remain for the students of the Siberian Federal University as a legacy."

During the Universiade, Krasnoyarsk 2019 say the MOC will form one of the "main elements" of their communication system.

Once the event is over, it is hoped the Centre will be used "to address public safety issues".