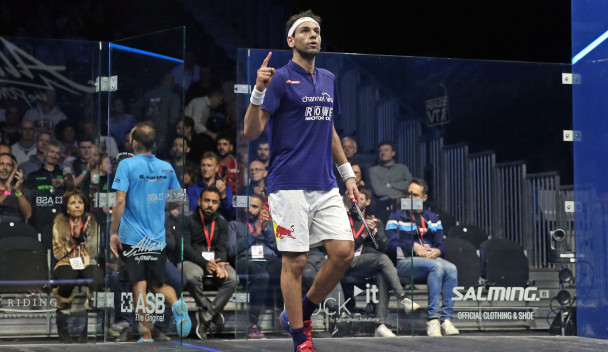 Mohamed Elshorbagy came back from 2-0 down for the second time in two days to book his place in the third round of the Professional Squash Association (PSA) British Open at the Airco Arena in Hull.

The number one seed, who recovered from a 2-0 deficit to beat Peru's Diego Elias in his opening match yesterday, again found himself on the verge of defeat as France's Gregoire Marche went 2-0 up thanks to 11-8 and 11-4 wins in the first two games.

Egyptian Elshorbagy, however, once again recovered spectacularly to take the next three games by 11-7 scorelines to ensure he made it through to round four.

After his victory, Elshorbagy, the world champion who has been suffering from illness, said: "He [Marche] played so well the first two games.

"I lost a bit of focus in the first game when I was 7-4 up but all credit to him, he played some incredible squash.

"We came together through juniors and have shared a lot of memories together and it's great to see him playing well.

"He is a pleasure to watch and I'm really pleased to see him playing well.

"I'm still in the tournament, it's not over for me and I know that any day I can beat anyone and I don't think I can be written off yet.

"I've had two tough matches but that's what I train for and I’m just glad to be in another quarters."

"I played Salma in the second round and it was a very difficult draw," El Sherbini said.

"Salma was playing really well and it was showing in every shot.

"She's capable of doing more but I'm just glad that I got my game plan and confidence back and it was very important to win the second game.

"We've been playing at the same club for more than 10 years and have been playing together and training together so it's hard to play an Egyptian, especially if you know her very well, but that's the game and we have to deal with it."

England's Alison Waters gave home fans something to cheer about as she surprised Egypt's world number five Nouran Gohar by beating her 11-9, 9-11, 11-2, 11-3 in just 32 minutes.