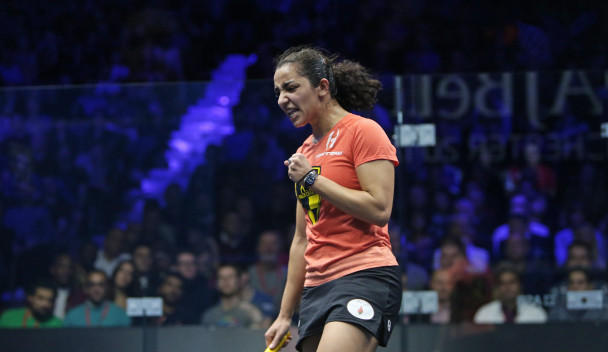 It was El Sherbini, who has been world number one for almost two years, who seized the initiative early on, claiming an 11-5 win to give herself a 1-0 lead.

El Welily, however, managed to shift the momentum back in her favour in the second game with an 11-5 win.

The 29-year-old kept then up this good form in the third game, winning it by a convincing 11-3 scoreline.

This win put the 2017 World Open champion 2-1 up overall and within touching distance of the first-ever women’s El Gouna International title to be awarded.

El Welily did not seem phased by what she was about to achieve and she looked like she was going to seal the title in style as she gave herself five championship points in the fourth game.

El Sherbini, however, showed why she has been at the top of the women’s game for so long and recovered miraculously to take the game to a tie-break.

Eventually though, despite the immense pressure on her shoulders, El Welily managed to win the tiebreak 14-12, to ensure she went home with the trophy.

Following her win, El Welily said: “What a match that was, Nour [El Sherbini] played fantastic and was fighting back all the way to the end.

“I'm very happy that I managed to win it at the end and that I pushed myself.”

Things were much easier for number four seed Marwan ElShorbagy in the men's final as he cruised to a 3-0 victory over Egyptian compatriot Ali Farag and thereby lifted his first Professional Squash Association World Series title.

The 24-year-old dominated proceedings from the start and raced into an 11-8 lead inside the first game.

This clearly gave the Alexandria native confidence and he went on to record 11-5 and 11-4 victories in the next two games to ensure he ran out a 3-0 winner after just 39 minutes of play.

After his win, which means he will overtake France's Gregory Gaultier as world number three in May, ElShorbagy said: “To win my first ever World Series title here in Egypt means a lot to me.

“Especially to win it here at home means the world.

"I'm so happy, I'm over the moon and I can't even describe how I feel.

“I've lost a few major finals before, but coming into this one I just had to learn from the losses I had and I had to be more relaxed and more focused.

"Me and my coach put a good game plan together before the match.

“Always when you play Ali [Farag] it's a tough battle.

"We've played a few times this season, he's had a great season and he's up to world number two now which is his best ever ranking.

"I congratulate him for an amazing season and I'm sure we'll play many more battles again.”