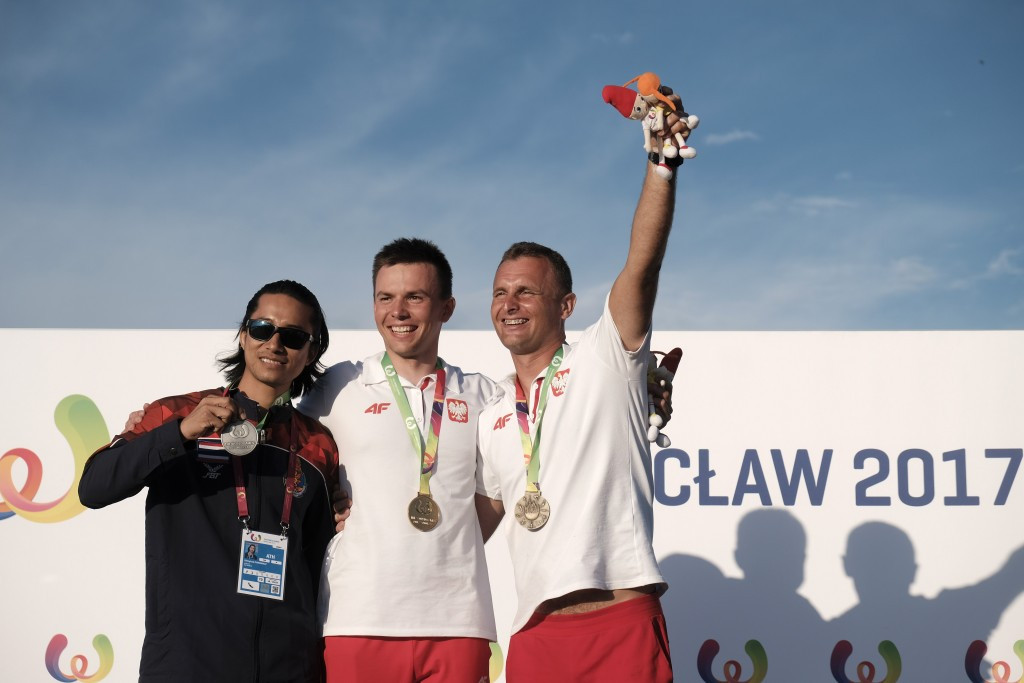 There  success for the host nation as they secured gold and bronze in the men’s paramotor slalom finals at Szymanow Airport.

Kittiphob Phrommat of Thailand managed to manoeuvre in between the two Poles to take silver.

The United States were the dominant force in the men’s parachuting canopy piloting final as they occupied the top two positions.

Nicolas Batsch secured the gold medal and compatriot Curtis Bartholomew clinched the one-two for the Americans.

Italy produced a clean sweep in the artistic roller skating programme, taking all four gold medals at the Swidnica Sports and Recreation Centre.

Frenchman Pierre Meriel secured the silver medal on 348.200 points and Argentina's Juan Francisco Sanchez completed the top three with a score of 334.800.

Silvia Nemesio captured gold in the women's equivalent with her total of 376.300.

Spaniard Monica Gimeno finished under six points behind on 370.800 with Brazil's Rafaela Freitas a long way back on 325.100.

Italian pairing Alessandro Spigai and Elena Leoni led a one-two in the free dance final with a score of 191.300 points.

Their compatriots, Silvia Stibilj and Andrea Bassi followed behind in second on 185.000 points.

Completing the top three was the Portuguese pairing of Jose and Mariana Souto, who posted 183.300 points.

Italy's rout was then complete when Lucaroni combined with Rebecca Tarlazzi to win the pair long programme with an overall score of 377.900 points.

Following behind in second place was another Italian pair.

Sport climbing action drew to a close in Nowy Targ Square today with the men’s and women’s lead competitions.

Keiichiro Korenaga led a Japanese one-two in the men’s event.

He defeated compatriot Yuki Hada in the final to win the gold medal.

The women’s title was won by Belgian Anak Verhoeven.

Silver was awarded to Slovenian Janja Garnbret and Julia Chanourdie of France won the bronze.

Guerrero won individual bronze on Friday (July 21) but combined with her partner to defeat Kelly Kulick and Danielle McEwan of the United States in the gold medal match at the Sky Tower.

The South Americans powered past their opponents to record a 922-874 success.

Sandra Gongora and Tannya Lopez of Mexico sealed the medal bronze with an emphatic 965-835 win over Venezuelans Patricia de Faria and Karen Marcano.