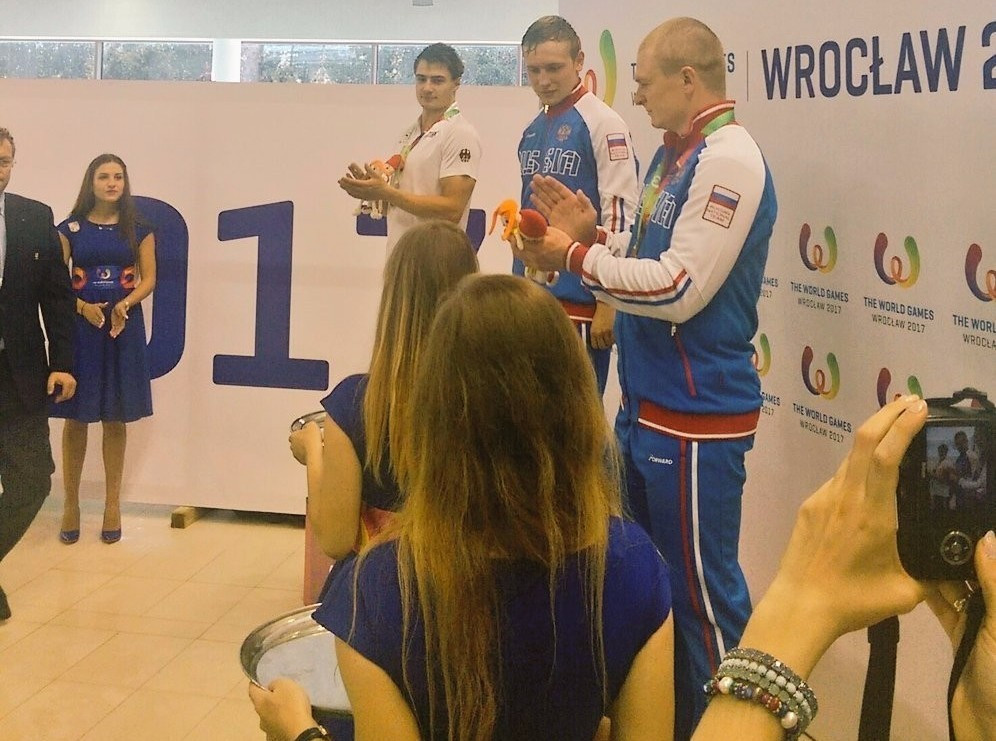 Russia claimed three gold medals out of a possible seven in fin swimming on the opening day of action at the World Games here.

Dmitrii Zhurman won his country's first gold medal in the pool as he proved fastest in the men's surface 100 metres final in 34.70sec, a World Games record, at Orbita Hall.

Germany's Max Poschart took the silver medal in 34.84 and Pavel Kabanov secured a second spot on the podium for Russia as he took bronze in 34.92.

Third place went to Ukrainian Anastasiia Antoniak with a time of 1:28.76.

A memorable day for Russia then concluded in the women's 4x100m surface relay.

The team of Mikhaylushkina, Baranovskaya, Anna Ber and Aleksandra Skurlatova also broke the World Games record with their time of 2min 34.78sec.

The 23-year-old defeated Kelly Kulick of the United States 2-0 in the final.

Gwendal Le Pivert of France sealed the bronze medal in 24.461.

Yi Seul An of South Korea finished in second place in 26.529 and Sandrine Tas of Belgium took the bronze medal in 26.544.

The event is preparing to make its debut on the Olympic programme at Tokyo 2020 and Japan and Russia took golds at Nowy Targ Square today.

Both have enjoyed success on the World Cup circuit this season but it was Arina who won gold in both the hoop and ball apparatus today.

She topped the hoop standings with a score of 17.800 while Dina secured her first silver of the day on 17.750.

Linoy Ashram of Israel secured bronze with her score of 17.700.

Arina then defeated her sibling once again to win ball gold on 18.800.

Dina was once again forced to settle for second place on 18.350.

Belarus' Katsiaryna Halkina rounded out the podium with 17.250.

Their score of 22.550 was good enough to seal first place in front of Hungarians Daniel Bali and Dora Hegyi, who took second on 21.850.

Bronze went to Romania's Dacian Barna and Andreea Bogati with their total of 21.700.

The Korean squad posted an unbeatable score of 18.825 with Russia trailing behind in second on 18.550.

Hungary completed the top three with their score of 18.400.

Action is due to continue tomorrow with medals to be awarded in eight sports.