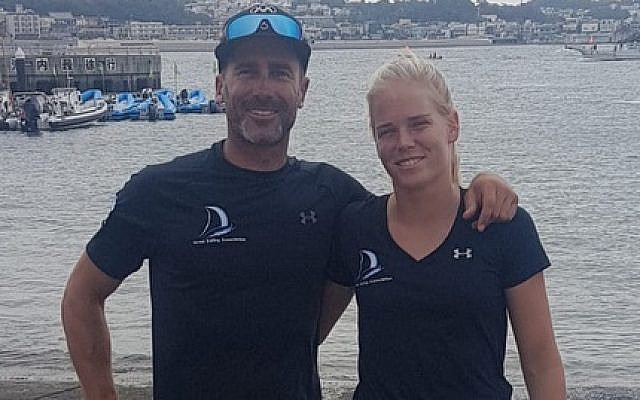 Israel's best hope for an Olympic medal at Tokyo 2020 is at the centre of a public scandal that could affect her chances after it was revealed that she has been in an eight-month affair with a coach, who has been fired over the relationship.

Spychakov was reportedly given extra one-on-one training sessions due to her relationship with the 37-year-old Frenchman.

Rival windsurfers claim this gave her an unfair advantage in the race for the single spot representing Israel at the Olympics.

Under the current selection criteria, the only way Spychakov cannot earn the one place at Tokyo 2020 is if another Israeli wins the gold medal at next year's RS:X World Championships in Sorrento in Australia and she fails to place.

Rivals are calling for all previous progress to be deleted and for the Olympic selection process to be restarted.

Spychakov's medal at the World Championships was the first by an Israeli competitor in the event since 2014.

She had also finished third in the test event for Tokyo 2020 in Enoshima Yacht Harbor in August.

The Israel Sailing Association (ISA) has rejected demands for Spychakov to be suspended but have dismissed Loquet.

"In a conversation with the coach and the surfer, both confirmed their relationship," the ISA said in a statement.

"Therefore, and in accordance with the ethical code and rules of the Sailing Association, it was decided to end the coach’s employment after three years."

The ISA have also set up a special committee to investigate whether Spychakov received an unfair advantage in the race for the Olympic spot.

Spychakov was born in Eilat to Ukrainian-born parents and had originally been an aspiring triathlete before switching to windsurfing at the age of 10.

She has confirmed that is in a relationship with Loquet.

"Last February a romantic relationship developed between me and Pierre, and both of us are happy with that," Spychakov told Israeli newspaper Yedioth Ahronoth.

"We are totally in love.

"In recent months no athlete was harmed or discriminated against due to our relationship.

"The coach can’t change the wind, and we are alone at sea.

"We weren’t aware of the ethical code and that is now having consequences.

"I understand the criticism, I get the rules, but we didn’t choose to fall in love.

"We chose to take the risk.

"I definitely am not sorry for the beginning of the affair and where it has led us."

Since its Olympic debut at Helsinki in 1952, Israel has won a total of nine medals.

Three of them have come in windsurfing, including the country's only gold for Gal Fridman at Athens 2004.