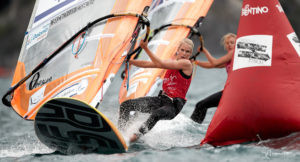 Unpredictable weather continued to plague competition, with three races taking place in the women's event and only one in the men's in in Torbole.

Lu finished eighth, fourth and first to take the lead, with De Geus coming first, second but then struggling in the third and final race with a 23rd place finish.

In the men's race, Piotr Myszka from Poland won to rise to fifth overall.

Dorian Van Rijsselberghe of The Netherlands came second to sit in third place overall, while his compatriot Kiran Badloe took the lead in the standings with a third place finish.

Badloe has a five point buffer over his nearest opponent, Pierre Le Coq of France.

Competition is due to conclude tomorrow with the medal races, when the final positions are determined.