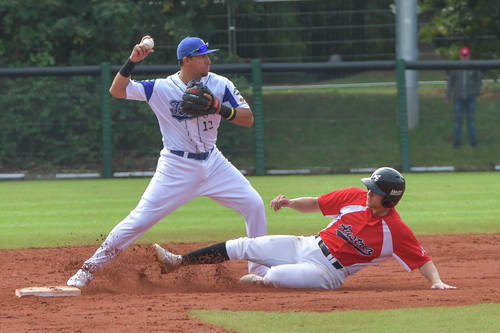 The Netherlands recorded their first victory at the 2019 European Baseball Championship to get their title defence back on track in Germany.

The Dutch had their opening match suspended due to bad light before falling to an 8-6 defeat against Czech Republic in Bonn yesterday.

The Netherlands bounced back with a crushing 9-0 triumph against Sweden.

The result improved the Dutch team's chances of progressing to the knockout round, with the top four of each group securing a place in the next phase of the tournament.

Defeat leaves Sweden bottom of the group with three losses, while the Dutch moved into a qualification position.

Britain earned their first win of the tournament with a 4-3 victory over the Czech Republic.

Germany and Israel will complete the day's programme this evening, with both sides having won their opening two games.

In Group B, Italy maintained their perfect start with a crushing 10-1 victory against Austria.

The Italians, who needed a 10th inning to defeat Croatia yesterday, dominated the match in Bonn to make it three wins from three.

Spain are level with Italy at the top of the group after fighting back from 3-0 down to defeat France 6-3.

Belgium gave their knockout round hopes a boost with a 9-6 victory against Croatia.

Croatia and Austria prop up the group with three successive defeats each.