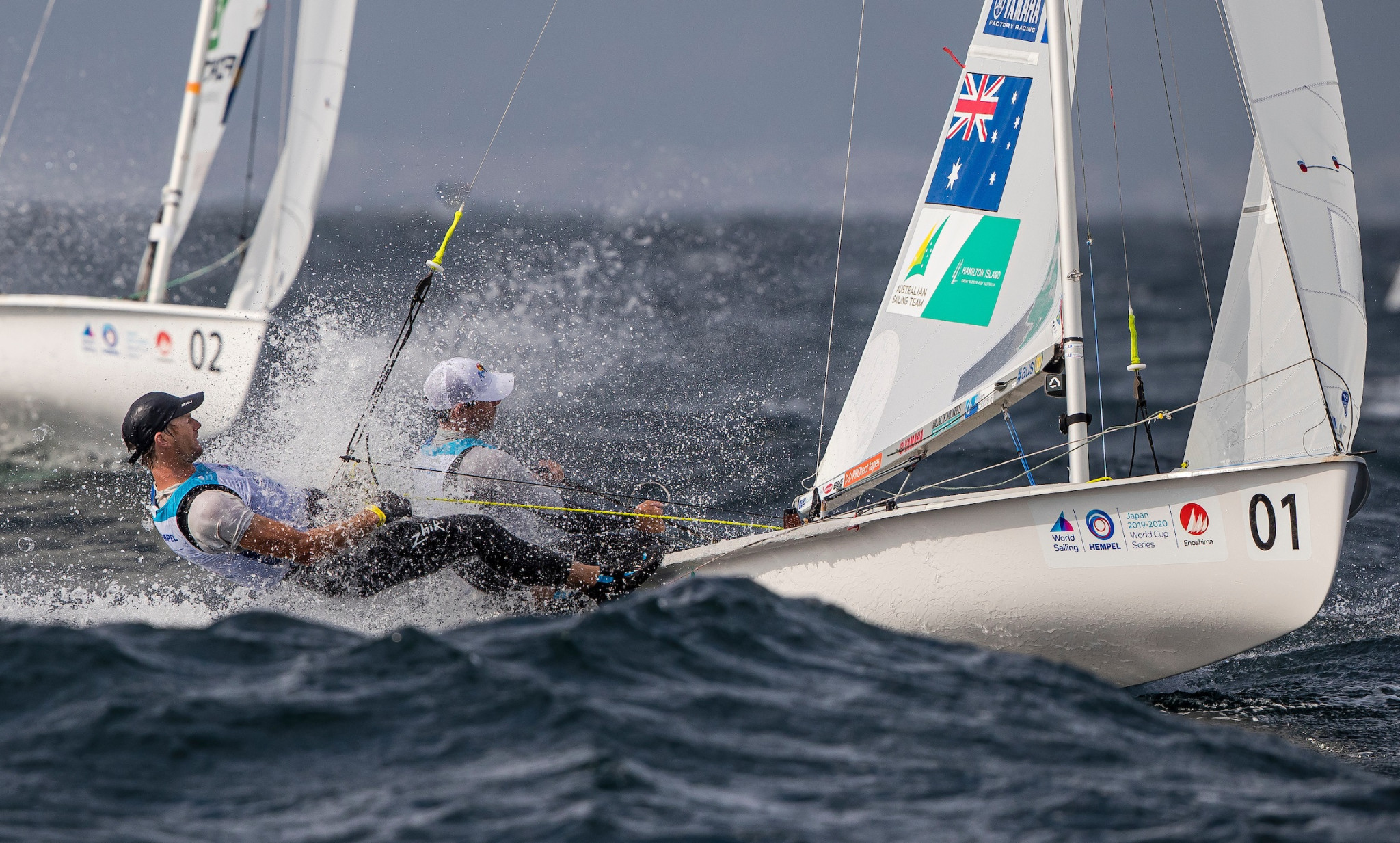 Mat Belcher and Will Ryan took over the lead in the 470 fleet at the Sailing World Cup in Japan, as they look for a third victory in quick succession on the Tokyo 2020 Olympic course.

The Australian Olympic silver medallists won the 470 World Championship title at Enoshima Yacht Harbor at the start of this month, then triumphed at the Olympic test event which concluded last week.

They are making full use of the chance to experience potential Tokyo 2020 conditions, and claimed two race victories and a second place on day three of competition.

It came as extra races were added, after the weather curtailed the schedule on each of the first two days.

There were light breezes on day one, which changed dramatically into huge winds and waves yesterday.

Big waves were still a feature today, but a full programme of racing was possible, despite many boats capsizing.

Belcher, the Olympic champion at London 2012 alongside Malcolm Page, and Ryan now sit on four points.

China's Yunxiu Lu enjoyed a perfect day in the women's RS:X with three race victories and now leads the way by 11 points.

Belgium's test event winner Emma Plasschaert has gone top in the women's laser radial, despite an average day which saw her finish eighth, 15th and seventh.

Nobody else could take advantage and she leads by two points from Denmark's world champion Anne-Marie Rindom.

"It was an alright day for me," said Plasschaert.

"A medium but okay day – no big scores.

"No firsts, seconds or thirds but that's okay at this stage of the event.

"I think it was pretty solid racing with nothing crazy going on.

"The Race Committee nailed the races one after each other.

"Nice waves and big winds, it was good fun.

In the women's 470, Australia's Nia Jerwood and Monique de Vries ended fourth, second and second to top the standings by five points in front of Italy's Elena Berta and Bianca Caruso.

Saxton and Boniface also recorded a victory and lead by two points from Australia's Jason Waterhouse and Lisa Darmaninm, with the Italians fourth, five points behind.

"It looks pretty intense when you’re out there," said Tita.

"The waves are short and quite big for the wind.

"It's hard to sail the Nacra with the foils.

"For sure we like the conditions with wind and waves in Enoshima.

"We suffer a bit in the light wind.

"At the moment we've always had good winds here so we're happy with that."

In the men's laser, Pavlos Kontides recorded a victory, a fifth place and a second to take charge with a nine-point advantage over Croatia's overnight leader Tonci Stipanovic.

Dutchman Nicholas Heiner was third, third and fifth to build a six-point lead over Canada's Tom Ramshaw in the finn, while in the men's 49er, Germany's Tim Fischer and Fabian Graf have a seven-point lead, despite finishes of sixth, 14th and sixth.

There were numerous black flag disqualifications in the first race of the 49erFX, including Brazil's Rio 2016 champions Martine Grael and Kahena Kunze.

The South Americans won the test event and were overnight leaders, but have now slipped to sixth after also failing to finish their third race.

France's Julie Bossard and Aude Compan are in second place.

Only five boats finished the final race after most of the fleet capsized.

In the men's RS:X, Louis Giard of France ended second, eighth and eighth and is two points in front of his team mate Pierre le Coq.

The first World Cup of the season runs until Sunday (September 1).