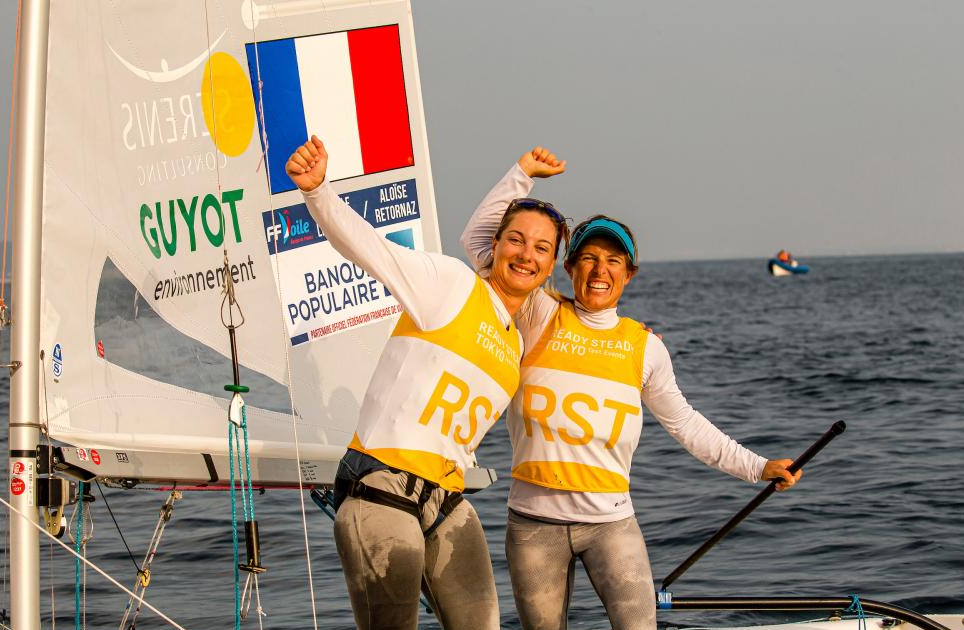 Only one medal race was possible on the final day of the Tokyo 2020 sailing test event as light winds frustrated at Enoshima Yacht Harbor.

Five classes had yet to conclude on next year's Olympic course but only the women's 470 was settled on the water as the event drew to a close.

Camille Lecointre and Aloise Retornaz of France came out on top after leading overnight in front of Britain's Olympic champion Hannah Mills and her new partner Eilidh McIntyre by a single point.

The French duo performed superbly to win the race and ensure what happened behind them was immaterial.

"We are really happy to win here one year before the Olympics," said Lecointre.

"It was a very tough situation; the points were tight and anything could happen.

"There was pressure for the medal race, but very quickly we got in front, and then we could breathe a bit more."

Retornaz added: "It was a long day; we wanted to go sailing and when we arrived on the water it was a new wind we didn't know.

"We have a lot of training ahead of us – we know already what we want to work on."

In the four remaining classes the overnight leaders were confirmed as the champions although Hungary's Zsombor Berecz had already wrapped up the men's finn title with a day to spare.

Nicholas Heiner of The Netherlands and Giles Scott of Britain were set to do battle for silver but the Dutchman was given second place when racing was abandoned.

Rio 2016 champion Scott was left to settle for bronze.

In the women's laser radial the medal race did begin but was called off halfway through.

It gifted gold to Belgium's Emma Plasschaert, who had led Dutch Olympic champion Marit Bouwmeester by three points going into the final day.

"We went out but it was already quite marginal," said Plasschaert.

"We started a race but throughout the downwind it started to die out, and we rounded the gate with no wind, so they made a fair call to abandon it.

"It's a shame we couldn't finish it because I was in a good position, but they made the right call."

In the men's laser Sweden's Jesper Stalheim was confirmed as champion after beginning the day three points in front of Australia's Rio 2016 gold medallist Tom Burton.

In the men's 470 Rio 2016 silver medallists Mat Belcher and Will Ryan took home the title.

They begun the final day two points clear of Anton Dahlberg and Fredrik Bergström of Sweden as bronze went to Spaniards Jordi Xammar and Nicolas Rodriguez.

All of the Olympic test events are running under the Ready Steady Tokyo banner.

A Sailing World Cup will now be held in Enoshima next week.