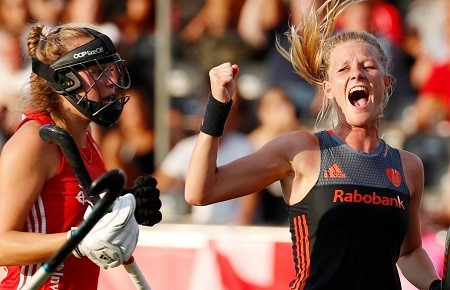 Defending champions the Netherlands recorded the biggest semi-final victory at a Women's EuroHockey Nations Championship by thrashing England 8-0 in Antwerp.

The World Cup winners were in superb form and were three goals up at the halfway stage at Wilrijkse Plein.

The rampant Dutch side, chasing a 10th European title, added five more in the final two quarters to complete the rout and set up a meeting with Germany, who scored a last minute goal to beat Spain 3-2.

Laurien Leurink, Lidweij Welten and Caia van Maasakker scored twice for the Dutch, while Marloes Keetels and Xan de Waard also got on the scoresheet.

"We didn’t start off well in this tournament but we kept having faith in each other and we are growing into the tournament," said Welten.

"It didn’t fall for us against Spain but it did today and I think we did very well.

Lorenz finds the corner pushing Germany back into the lead #EHC2019

"It’s a Dutch phrase which means when people know you, they always have an opinion about you. It’s not always the nicest opinion but that’s okay.

"That’s the curse of being a big tree but it also has a lot of benefits.

The second semi-final looked to be heading for a shootout before Nike Lorenz found the net to send Germany through and break Spanish hearts.

Maria Lopez put Spain in front before goals from Cecile Pieper and Hannah Gablac swung the match in Germany's favour.

Marta Segu equalised with a brilliant effort before Lorenz scored the dramatic winner to continue her side's pursuit of a third European crown.