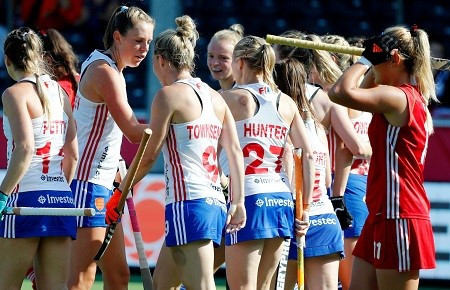 England ladies survived a scare against Belarus to book their place in the semi-finals of the EuroHockey Nations Championship in Antwerp.

Lily Owsley opened the scoring for Mark Hager's side at the Wilrijkse Plein in the Belgian city.

England were back in front in the Pool B clash at the break thanks to Laura Unsworth's 22nd-minute strike.

It looked like Belarus would snatch an unlikely draw when Natallia Shtsin scored seven minutes from time, but Hannah Martin notched a late winner for England.

England captain Hollie Pearne-Webb said: "They were much better today than they had been in the previous games so we’ll give them credit for that.

"We knew it wasn’t going to be an easy game.

"We knew they were going to be very different opposition compared to those we’ve played in the past and we knew it would be a fight – but we made it a lot more difficult for ourselves.

"The positive from today was that we got the win, got through to the semis."

In the pool's other match, Ireland and Germany shared the spoils in a 1-1 draw, guaranteeing Germany's progression to the last four.

Pia Maertens put the Germans ahead on eight minutes, only for Sarah Hawkshaw to level at the end of the first quarter.

But neither side could find a winner, so Germany reached the semi-finals on five points, while Ireland are left to contest the relegation pool later in the week.

Final score: @IreWomenHockey 1 (Hawkshaw) Germany 1 (Maertens) - gutting, the crucial finish just evaded Ireland in a hugely impressive performance once again. The wait for a semi-final place in this competition goes on #EHC2019 pic.twitter.com/OuFrz1Jndr

England will face The Netherlands in the semi-finals on Friday after they secured their qualification from Pool A with a 14-0 drubbing of Russia.

The Spanish edged a close encounter with Belgium 1-0 to top the pool, Carlota Petchame getting the crucial goal in the 34th minute.

Spain will take on Germany in the semi-finals, while Belgium and Russia fall into the relegation pool.

The bottom two countries in the relegation pool will drop out of the top tier of European hockey.