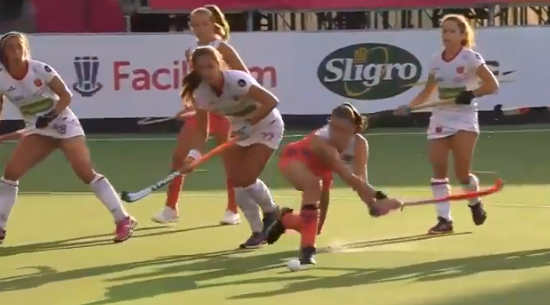 Reigning champions The Netherlands are on the verge of group stage elimination from the women's EuroHockey Nations Championship after being held to a draw by Spain.

The 1-1 result means the Dutch have drawn their opening two matches at the Wilrijkse Plein in Antwerp and must win their final Pool A game against Russia to have a chance of making the semi-finals.

Both goals came in the first six minutes - Caia van Maasakker’s early drag flick from a corner for The Netherlands was cancelled out within 60 seconds by Begona Garcia, who finished from Belen Iglesias' threaded pass to draw Spain level.

The Dutch dominated the remainder of the match, however, some brilliant saves from Maria Ruiz means everything now rides on beating Russia on Wednesday (August 21).

Russia have been eliminated and will have to play to avoid relegation to Championship II after losing 4-1 to hosts Belgium.

Belgium were three-up inside 15 minutes with goals from Louise Versavel, Anne-Sophie Weyns and Stephanie Vanden Borre, and though Bogdana Sadovaia pulled one back, Versavel netted a second for her and her team's fourth late on to seal victory.

How are the Netherlands not in the lead?! Great save from Ruiz in the Spanish goal, then Welten crashes one back off the post #EHC2019 pic.twitter.com/fooNZq7YdC

In Pool B, England withstood heavy pressure from Germany as the rivals drew 1-1 at the Wilrijkse Plein.

Both sides are on four points in the pool after Lily Owsley put England ahead in the first-half before Germany scored a deserved equaliser through Hannah Gablac.

Germany are due to face Ireland in the final group game on Wednesday after the Irish earned a crushing 11-0 victory over Belarus.

Following a close first-half where Roisin Upton and Anna O'Flanagan goals gave Ireland a 2-0 advantage, they blew the Belorussians away with nine strikes in 30 minutes.

Upton scored three more for a personal tally of four, O'Flanagan netted another, while there were doubles for Zoe Wilson and Nikki Evans, while Deirdre Duke scored the 10th goal.

England will progress with a win against Belarus, who have conceded 24 in their two group stage games so far.