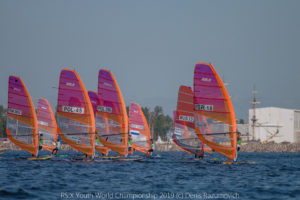 The qualification series for the RS:X Youth World Championship has concluded with three more races today in Saint Petersburg.

After blustery and changing conditions on day one, a reduced wind of between five and seven knots today forced the 104 competitors from 19 nations into alterations to strategy and technique.

Two Israeli windsurfers lead the boys’ rankings, Eyal Yohay Zror and Daniel Basik Tashtash – Zror has 10 points and has yet to finish outside the top three in any of his races so far.

Tashtash has 13 points overall, while among the chasing pack are Italy's Edoardo Tanas, France's Mathis Ghio, another Israeli in Riuven Hillel and Youth Olympic champion Alexandros Kalpogiannakis of Greece, all on 17 points.

Reigning champion Fabien Pianazza from France recovered from an extremely disappointing first day to climb to 12th overall and keep hopes of defending his title alive.

Things are going better for the other member of the Pianazza family competing at Neva Bay, with Manon Pianazza, Fabien’s sister, leading the women’s competition.

Pianazza has 14 points, followed by Israel’s Naama Greenberg and Linoy Geva on 17, while Russia’s local sailor Yana Reznikova has 19 after she won the first race of the day.

Pianazza did not win a race today but finished third, third and second in the tricky conditions to move to the top based on her impressive consistency.

At the end of the qualification races, the boys have been split into two fleets - gold and silver.

The 35 highest ranked racers go into the gold fleet and will continue to compete for the title.

The girls meanwhile continue as one competition.

Action is due to continue tomorrow with three more races.