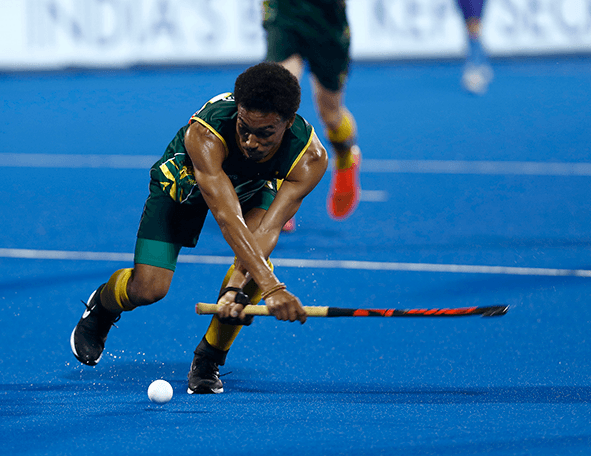 Japan and South Africa have qualified for the semi-finals of the men's International Hockey Federation Series Finals event in Bhubaneswar after beating Poland and Russia, respectively, in today's crossover round.

With a 6-2 win over Poland at Kalinga Stadium, Japan will play hosts India in an all-Asian semi-final.

The other semi-final will see South Africa, who progressed after defeating Russia 2-1, take on the United States.

Mikołaj Gumny put Poland ahead against Japan after team mate Joseph Hillyer found him in front of goal in the seventh minute.

Japan fought back, though, with Shota Yamada drag-flicking into the net from a penalty corner, before Hirotaka Zendana put his team ahead via another penalty corner.

A counter-attack from the Poles then saw Michał Poltaszewski send a clever pass to Maciej Janiszewski who, in turn, delivered a precise cross to his team’s leading goalscorer, Mateusz Hulbój, to score from short distance.

Early in the second half, Poland’s goalkeeper Maciej Pacanowski cleared a penalty corner but the ball came back to Kenta Tanaka, who made it 3-2.

Two minutes later, Japan made the most of Poland's poor clearance attempts to add another goal to their tally, Koji Yamasaki the scorer this time.

In the final quarter, Japan increased their lead with further goals from Kenji Kitazato and Yamasaki – his second of the night.

"If you win, it makes you happy," Japan’s head coach Siegfried Aikman said.

"But I was unhappy in the previous games with the way we conceded goals and today was similar: we dominate, our opponents get one chance and it’s a goal.

"So then we make it very hard for ourselves.

"We need to work harder.

"The inconsistency in our play is troubling me."

#FIHSeriesFinals #India #Odisha #Bhubaneswar@jha_hockey's Head Coach Siegfried Aikman: “If you win, it makes you happy. But I'm unhappy with the way we concede goals. The inconsistency in our play is troubling me. It’s fantastic to play the home nation. Exciting match ahead!” pic.twitter.com/rIAW3N16q4

All three goals in the match between South Africa, the second highest-ranked team in the tournament, and Russia came in the second half.

Halfway through the third quarter, South Africa's Nqobile Ntuli converted following a penalty corner, but at the beginning of the next quarter, Georgii Arusiia levelled from another penalty corner.

"We didn’t play our best hockey but we’re the winners against a good Russian side, so in these conditions we’re happy to get to the semi-finals.

"We didn’t have the best start against the USA in this tournament.

"It’s always hard from a South African point of view as we don’t have a lot of time together.

"We’ll be looking to put pressure on them and, hopefully, get a win there."

In today's other game, Mexico beat Uzbekistan 4-3 to secure a seventh-place finish.

The Mexicans established a 2-0 lead in the final minute of the first half, Maximiliano Méndez's drag-flick from a penalty corner followed by an effort from Alexander Palma.

Despite Mexico goalkeeper Jose Hernandez delivering a man-of-the-match performance, Uzbekistan fought back with goals from Gaybullo Khaytboev and Okhunjon Mirzakarimov.

They then took the lead via a penalty stroke from Ruslan Satlikov shortly before the end of the third quarter.

Mexico, however, were soon level when they too won a penalty stroke, which was converted by Yamil Mendez.

Eventually, Mexico’s captain Roberto Garcia decided the fate of the game, scoring the winner in the 59th minute.

Action is due to continue on Friday (June 14).

The two semi-finals will be preceded by the fifth-place playoff between Russia and Poland.