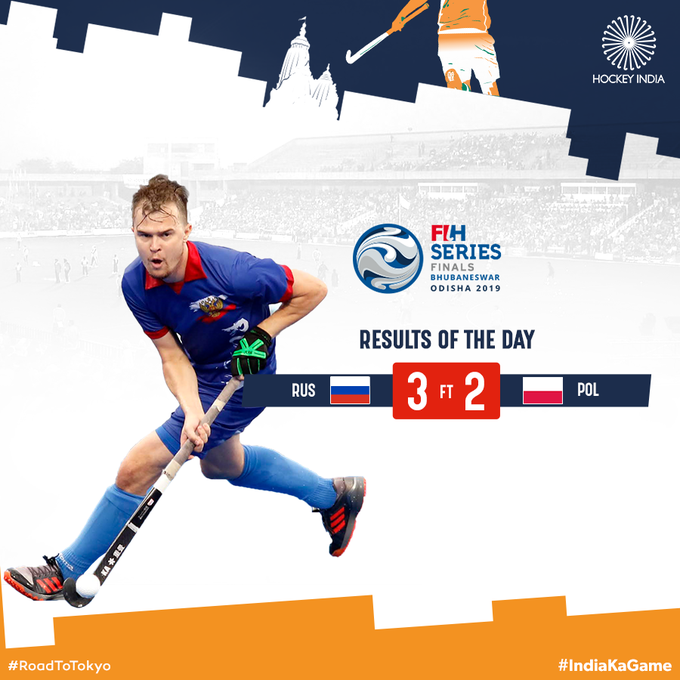 Russia scored twice late on to beat Poland and secure a place in at least the crossover round at the International Hockey Federation Series Finals in India.

The Russians claimed a 3-2 win to record their second victory of the tournament at Kalinga Stadium in Bhubaneswar.

The result saw Russia keep alive their slim hopes of an automatic place in the semi-finals.

Only one team from each group will qualify for the last four and Russia are level on points with India, who occupy top spot, with a hugely inferior goal difference.

Russia need India to lose to Uzbekistan by 10 goals tomorrow if they are to snatch first place from the host nation.

#FIHSeriesFinals #India #Odisha #Bhubaneswar
Russia’s Pavel Golubev, Man of the Match: “We came here to win this game. We had problems in the second and third quarters and conceded some unnecessary goals. But we kept focused and managed to win this game.” pic.twitter.com/M9Urf3bGt4

Pavel Golubev opened the scoring with a superb strike in the early stages of the second quarter before Mateusz Hulboj equalised just before the break.

Captain Pawel Bratkowski put Poland ahead in the third period but his side's hearts were broken in the dying moments.

Semen Matkovskiy converted a penalty corner three minutes from time before Golubev got the winner shortly after.

"At the beginning we were pressing and had a lot of good moments but couldn’t convert them into goals," said Golubev.

"That’s why we had problems in the second and third quarters and conceded some unnecessary goals.

"But we kept focused and managed to win this game.”