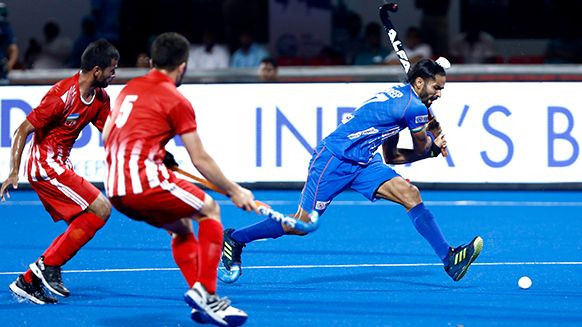 Hosts India and the United States earned direct qualification to the semi-finals at the group phase at the International Hockey Federation Series Finals concluded today.

India secured their place in the last four by thrashing Uzbekistan 10-0 at Kalinga Stadium in Bhubaneswar.

The host nation were all-but guaranteed to claim the sole automatic semi-final berth from Group A and would only have slipped to second place if they suffered a 10-goal defeat to Uzbekistan.

Instead they inflicted a crushing loss on their opponents to finish the pool phase with three wins from three.

Varun Kumar, Akashdeep Singh and Amit Rohidas found the net in the first quarter to give India a 3-0 lead.

Kumar and Akashdeep Singh scored again in the second period, while Nilakanta Sharma and Mandeep Singh added their names to the scoresheet before half-time.

Gursahibjit Singh added an eighth after the half-time break before Akashdeep Singh and Mandeep Singh put the gloss on a resounding victory in the fourth quarter.

In Group B, the US drew 2-2 with Japan to progress to the semi-finals on goal difference.

Deegan Huisman gave the Americans the lead in the 41st minute before Kenta Tanaka responded for Japan, who needed to win the match to qualify for the last four.

Huisman put the US back in front shortly after but Suguru Hoshi salvaged a point for Japan in the dying stages.

In the other match in the group, South Africa beat Mexico 6-0.

Japan are due to play Poland in the crossover round, while South Africa are scheduled to take on Russia.