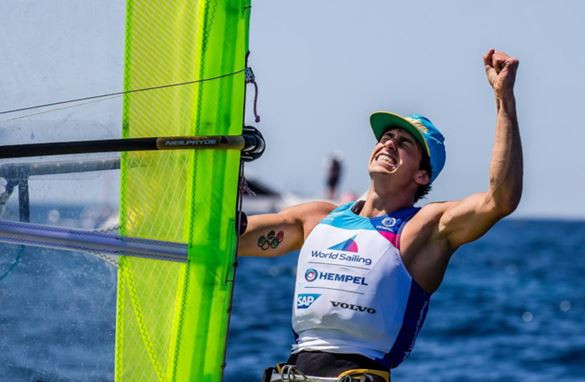 Blustery conditions made sailing difficult through the week, but as the winds eased to a variable eight to 10-knot breeze, Camboni took advantage.

Despite dropping to fourth yesterday, the Italian kept gold in his sights and clawed his way back to the top today.

Just seven points separated the top five and it was Polish leader Piotr Myszka who got off to the best start.

Camboni stuck closely to Spaniard Andel Granda-Roque as the fleet headed to the right side of the track and he found the right layline to push ahead.

The Italian clinched the lead on the final downwind but had to wait for the fleet to sail through to see if he would clinch gold.

“This means a lot,” said Camboni.

“Last year I missed out on a medal and it’s so good to be at the top, especially at the final of the World Cup.

“I didn’t have a good start but I said okay, now I have to give everything.

"I just believed and knew I could do it."

The women's RS:X class was won by Dutch favourite Lilian de Geus who held a comfortable advantage heading into the medal race.

She stayed out of trouble in a light wind to finish third and confirm the gold medal ahead of Britain's Saskia Sills.

Sills' game plan had been to stick close to her nearest rival, Italian Flavia Tartaglini, but she soon found herself at the back.

Silver looked like it was going to the Italian sailor but on the final downwind, Sills pushed hard and moved up the field to finish second overall and edge Tartaglini into third.

"This whole year I’ve been looking up at the results sheets at all the girls at the top, wishing I could be as good as them just for one race.

"To get a silver medal when they are all in the fleet feels amazing."

Italy did enjoy glory on the Marseille water, though, as Vittorio Bissaro and Maelle Frascari clinched victory in the Nacra 17 medal race.

The pair had a 16-point cushion over nearest rivals John Gimson and Anna Burnet and covered the British team to ensure there would be no surprises on the water.

Bissaro and Frascari finished fifth to claim gold and were followed by the British pair who took silver, with Italians Ruggero Tita and Caterina Banti claiming bronze.

Australia’s Mat Belcher and Will Ryan have all but confirmed gold in the men’s 470 as they take a 20-point lead into tomorrow's medal race.

Only a penalty could see them miss out on gold but that is dependent on Spaniards Jordi Xammar and Nicolás Rodriguez winning.

The race for victory in the women’s 470 will go to the wire with just one point separating British duo Hannah Mills and Eilidh McIntyre from French pair Camille Lecointre and Aloise Retornaz.

In the laser class, Italian Giovanni Coccoluto takes a two-point lead into the medal race, with any of the top six able to claim gold.

Lithuania's Viktorija Andrulyte has a 19-point lead in the laser radial class and looks set to take title honours tomorrow.