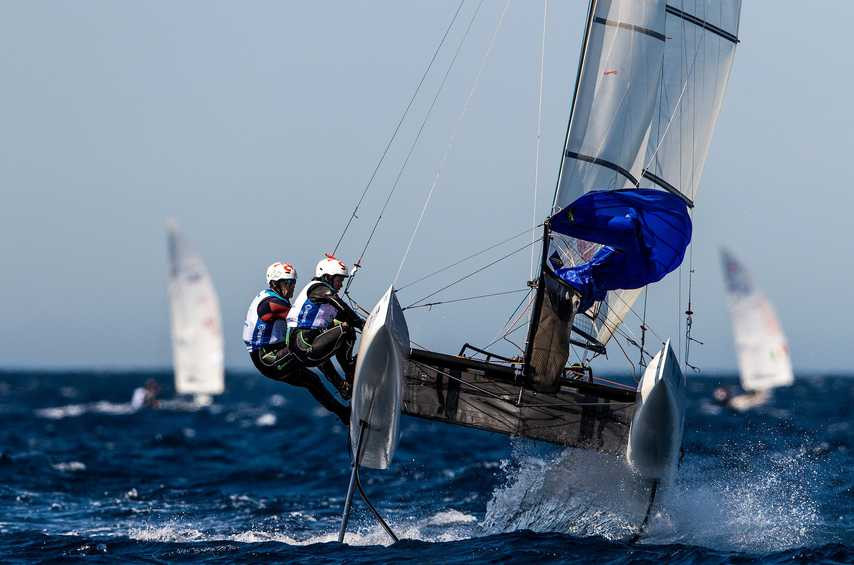 Mattia Camboni of Italy and Lilian de Geus of the Netherlands held top positions in the men's and women's RS:X after three days of racing at the Hempel World Cup Series Final in Marseille.

After high winds had forced the early finish of racing on Wednesday, sailors across all 10 Olympic events and open kiteboarding were able to enjoy a full day of competition.

Camboni, who had won two races and finished second on the opening day before high winds prevented any activity on day two, returned to business as usual with three wins and a second place.

Thee Italian has opened up an eight point advantage over Poland's Piotr Myszka and is a further two points clear of compatriot Daniele Benedetti.

"This event is also qualification for the test event,” he told World Sailing.

“We had the World Cup in Miami and this is the last event.

“Daniele and I are really close.”

De Geus has already qualified for Tokyo 2020 and will compete at her second Olympics next summer.

She advanced to first overall today with a 6-6-1 scoreline.

De Geus finished fourth at Rio 2016, her first Olympic Games, missing out on a medal by a single point.

"Ahead of Tokyo 2020, I've got to keep going on the pathway I'm going, taking steps forward every day," she said.

“If I do that then I have a good chance of taking a medal at Tokyo."

Saskia Sills of Britain secured a 7-3-3 scoreline and is two points off de Geus in second.

In the Finn class, New Zealand duo Andy Maloney and Josh Junior have won all five races between them, with Junior having claimed three.

After watching their team mates Ruggero Tita and Caterina Banti win Nacra 17 gold at the 2018 World Cup Series Final, Italy's Vittorio Bissaro and Maelle Frascari are heading for gold themselves with 2-5-2-1 scoreline that has enabled them to open up their lead over John Gimson and Anna Burnet of Britain.

After winning the single 49er race in strong breeze the day before, Spanish brothers Federico and Arturo Alonso dominated the four fleet today, winning three and taking one second place.

As a result they have opened up a 21-point advantage over Benjamin Bildstein and David Hussl of Austria.

Julie Bossard and Aude Compan of France earned two wins, a second and a third to go 10 points clear at the top of the 49erFX standings.

Two wins and a second place enabled Australia's Mat Belcher and Will Ryan to overtake Jordi Xammar and Nicolás Rodriguez of Spain at the top of the men’s 470 rankings.

France's Camille Lecointre and Aloise Retornaz moved from ninth to second in the women’s 470 with two race wins and a fourth.

Lithuania's Viktorija Andrulyte maintained her consistency in the laser radial with a 1-2-2 scoreline to open up a nine-point advantage.