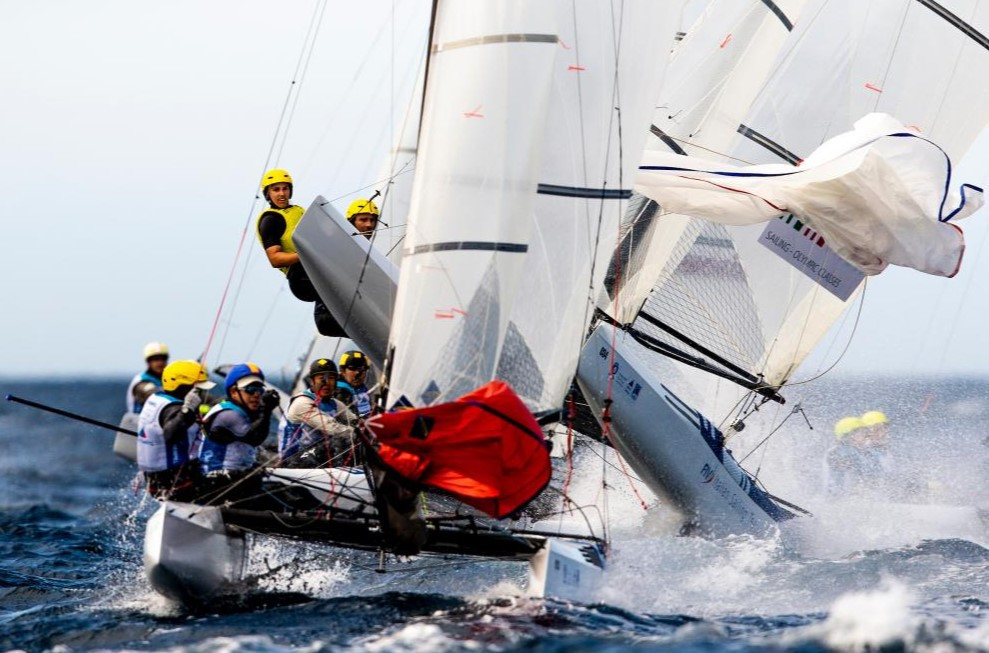 Italy's Vittorio Bissaro and Maelle Frascari moved within touching distance of the gold medal at the Hempel World Cup Series Final as they raced into form that has been unmatched in the 24-boat Nacra 17 fleet in Marseille.

Bissaro and Frascari have dominated the 11 Nacra 17 races in Marseille, winning four, claiming three seconds, a third, a fourth and a fifth.

A vibrant Bissaro said the duo had relished the blustery conditions, as poor weather prevented the laser classes from taking place.

"We just love these conditions," he said.

"The possibility to race in these conditions is a pleasure.

"We just can't wait to get out there in this type of breeze and have the opportunity to race."

Just one year ago, Bissaro and Frascari watched compatriots Ruggero Tita and Caterina Banti clinch the Nacra 17 World Cup title as they settled for silver.

This year, the tables have turned and Bissaro and Frascari have a 16-point advantage over British pair John Gimson and Anna Burnet, with Tita and Banti a further nine points adrift in third.

In the first race of the week, Bissaro and Frascari protested against their Italian rivals, with Tita and Banti being disqualified.

The pair bounced back from disqualification with three race wins but the points difference to their countrymen means Tito and Banti cannot secure the gold medal.

Just one Italian Nacra 17 team can go to the Olympic test event and the Italian federation has a tough decision to make with both teams in fine fettle.

To say there’s a bit of a breeze today would be an understatement! 😳

Listen to the wind 💨 and take a look at those waves 🌊 #hwcsmarseille ⛵🌍🏆🇫🇷 pic.twitter.com/dogEiVonmc

in the 49er class, Federico and Arturo Alonso wrapped up gold ahead of the medal race after another day of domination.

The Spaniards, who have finished outside the top three just once all week, hold an unassailable 27-point over Austria's Benjamin Bildstein and David Hussl after a 2-1-2 scoreline.

Mattia Camboni was in the doldrums as he got knocked off top spot in the men's RS:X.

The Italian had led the fleet all week before a 12-(16)-4 scoreline dropped him down to fourth.

Poland's Piotr Myszka took advantage with a 6-2-3 scoreline to climb to the top of the standings.

Camboni's compatriot Daniele Benedetti sits just one point behind Myszka on 27 points with Frenchman Pierre Le Coq on 29, ensuring a good tussle for the medals tomorrow.

Julie Bossard and Aude Compan (FRA) will take a four-point lead into the 49erFX medal race.

In the women's RS:X fleet, Lilian de Geus maintained her advantage with a 1-2-4 scoreline and she takes an 11-point lead into the medal race, with Great Britain's Saskia Sills in second.

In the 470 fleets, Australians Mat Belcher and Will Ryan, and British pair Hannah Mills and Eilidh McIntyre held on to their leads in the men's and women's divisions.

The laser and laser radial fleets were scheduled for later in the day but as the breeze picked up, they were unable to race.