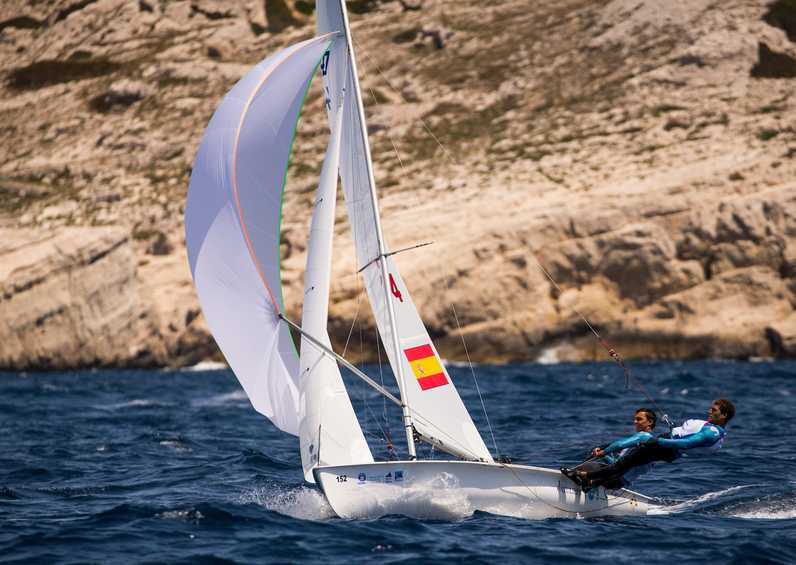 Marseille, sailing venue for the Paris 2024 Olympics, witnessed Spain's Jordi Xammar and Nicolás Rodriguez getting off to a flying start at the Hempel World Cup Series Final as they won both of their opening races in the Men's 470.

In a variable 7-12 knot south easterly breeze, competitors from 41 nations, racing across the ten Olympic events and an open kiteboarding fleet completed every scheduled race.

Xammar and Rodriguez shone on the Marseillaise waters in the 29-boat Men's 470 fleet.

"We're happy with the day,

"it's a good beginning, but there's plenty of races to go."

The Spanish duo finished more than 30 seconds ahead of Giacomo Ferrari and Giulio Calabrò of Italy in the first race, and edged Australia’s perennial favourites Mat Belcher and Will Ryan by four seconds in the second race.

Xammar and Rodriguez won gold earlier in the year at the World Cup in Miami, their first ever title in the series.

At the end of day one, the Spanish team lead Belcher and Ryan and Italy's Ferrari and Calabrò by three points.

Consistency was at a premium in the Women's 470 with no team able to replicate the Spanish team’s complete performance.

Germany's Frerike Loewe and Anna Markfort finished third in both races and hold the lead.

Hannah Mills and Eilidh McIntyre of Britain took the first race win of the week and are second and the second race winners, Afrodite Zegers and Lobke Berkhout of The Netherlands  are fifth.

Italy's Mattia Camboni had the luxury of being able to discard a second place in the men’s RS:X class as he registered two race wins.

Angel Granda-Roque of Spain took the third race win and is second overall, a point off Camboni.

Katy Spychakov of Israel, Megumi Iseda of Japan and Bryony Shaw of Britain took a race win each in the women's RS:X.

Iseda added a second place and a 17th, which she discarded, and holds first overall with nine races remaining.

Four-time world champions and French SailGP team members Billy Besson and Marie Riou of France  are tied at the top of the 24-boat Nacra 17 fleet with current world champions, Ruggero Tita and Caterina Banti of Italy.

The 49er and 49erFX fleets both completed three of 12 races they have scheduled ahead of the medal race on Saturday (June 8).

After day one, French favourites Kévin Fischer and Yann Jauvin hold the gold medal position in the 49er after a fairly consistent day that saw them record a 9-2-1 scoreline.

They discard their ninth place which puts them two points clear of Spanish brothers, Federico and Arturo Alonso.

Austria's Laura Schöfegger and Anna Boustani and France's Julie Bossard and Aude Compan are tied at the top in the 49erFX.

At the end of the day, Maloney holds the lead on three points with Junior following on five.

Singapore's Ryan Lo  earned a second place and a race win in the Finn class and is three points clear of the day's other race victor, Zan Luka Zelko of Slovenia.

In the laser radial, Carolina Albano of Italy recorded a first and a second to take the early initiative.