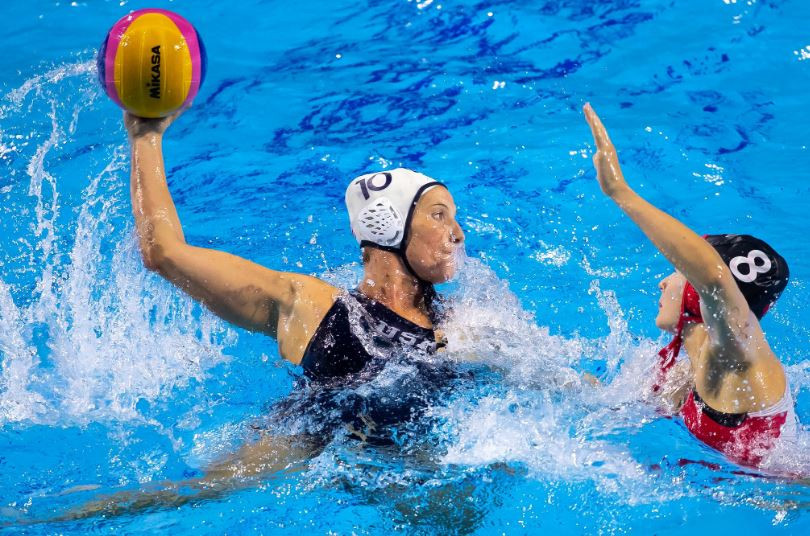 The 20-year-old had been dominant in the reigning champions' 12-9 victory against hosts Hungary and there was no let up in their second group match against Canada.

A perfect first quarter saw the US lead 6-0 and they extended to 9-2 their lead with Musselman leading the charge alongside Aria Fisher and Alys Williams.

By the end of the third quarter, the game was over as a contest as Musselman and Maggie Steffans stretched to 13-4 the advantage.

A further two goals in the final quarter rounded off a comfortable 15-4 win for the US.

After the match, Musselman praised the team bond among the US team.

"It's only been a couple of weeks and we're already getting back into the flow of things, so it's really exciting.

"We still have a long way to go with regards to getting to know each other better in the water and people's strengths and weaknesses.

"We're all happy to be back together and excited for the future."

Canada, in contrast, have an uphill battle to progress after the group's other game saw Russia defeat Hungary 14-9.

The Russians were clinical against the host nation as they won each quarter and will go into tomorrow's match with the US in confident mood, with the winner topping the group.

Australia clinched their first victory at the meet after overcoming China in a tight Group A match.

Both teams had lost their opening group matches.

A tight opening quarter saw the sides level at 2-2 and by half-time it was the Australians who led, taking a narrow 4-3 lead courtesy of two Hannah Buckling goals.

A tense third period saw the Chinese fight back and they got in front for the first time at 6-5 with an extra-man goal, with Australia's Isobel Bishop excluded.

Bronte Halligan's lob saw the Australians regain the lead at 7-6 as the game moved into the final quarter.

A game of punch and counter-punch saw China fight back but Rowena Webster completed her hat-trick and Buckling took a great steal before swimming the length of the pool to effectively secure victory.

China hit back to trail 10-8 but Australia held on to give themselves a chance of progressing in a winner-takes-all match with the Netherlands.

The Dutch and Italians squared-off in the group's other game, with both teams having enjoyed opening-day victories.

Something had to give, though, and it was the Italians who left the Duca Arena happier after securing a narrow 8-7 win.

Italy are turning into the surprise package at the Super Final in their first appearance in the World League for three years.

In a topsy-turvy match, the Italians pulled clear in the third quarter and top group B with two wins from two.