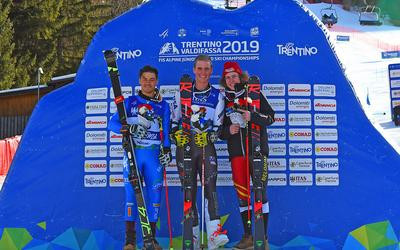 The United States' River Radamus further cemented his status as a star of the future by claiming his second gold medal of the International Ski Federation World Junior Alpine Skiing Championships with victory in the men's giant slalom in Val di Fassa.

Radamus added the giant slalom crown to the super-G title he won last week as he clocked a combined time of 1min 57.96sec for the two runs.

The bronze medal was won by Sam Maes of Belgium after he completed his two runs in 1:58.89.

Victory for Radamus saw him clinch his third medal of the Championships as he continued his impressive performance at major junior events, having also won a silver in the team event in the Italian resort.

Radamus had emerged as an athlete to watch at the 2016 Winter Youth Olympic Games in Lillehammer, where he won three gold medals.

"It was an amazing experience.

"Even though I had a good lead, I knew that it would take a little to get off the podium."

The event in Val di Fassa is due to tomorrow with the men's slalom competition.