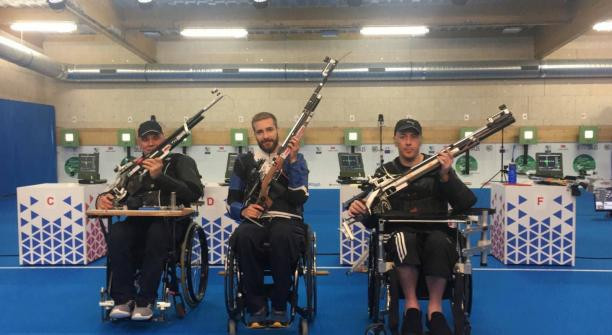 The former wheelchair basketball player scored 255.7 points on the final day of the event to add gold to the silver and bronze he had won on previous days.

New Zealand's Paralympic champion Michael Johnson had to settle for a second silver, although he was only marginally behind on 255.1 points.

Britain's Beijing 2008 champion Matt Skelhon took gold in the R3 10m air rifle prone mixed SH1 by just a tenth of a point as he finished with 253.4 to edge Finland's Jarkko Mylly, who scored 253.5, into silver medal position.

The 33-year-old Briton, a silver medallist at the World Championships in May, had earlier won a bronze.

Italy's Hoda Beatrice Broccolo took bronze with a final score of 231.6 ahead of Germany's Natascha Hiltrop, who scored 209.7.

Gold in the P4 50m pistol mixed event went to Ukraine's Oleksil Denysiuk, who scored 224.6, with silver going to India's Raj Singh on 222.2 and bronze being claimed by another Indian shooter, Manish Narwal, with 203.4.

In the team events, India won the P4 mixed 50m pistol SH1 title ahead of Poland and Turkey.