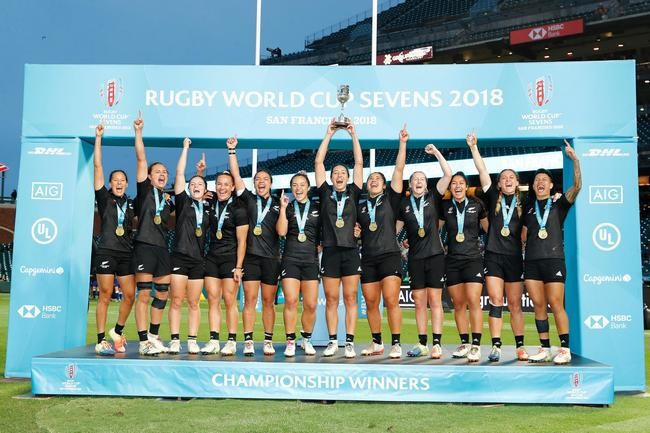 Victory secured the Kiwis a fifth title in as many events after success at the 2018 Commonwealth Games in the Gold Coast and the final three rounds of the World Rugby Women's Sevens Series.

Having come from behind to beat host nation the United States 26-21 in the semi-finals, New Zealand enjoyed the perfect start to the final when Michaela Blyde raced away for her seventh try of the tournament after some good work by Tyla Nathan-Wong.

Their second try came midway through the first-half after they turned defence into attack from deep in their own half with a charging run from captain Sarah Goss and calmness from her team-mates to recycle the ball and create the space for Portia Woodman to run in her sixth try in 2018 and 18th in Rugby World Cup Sevens history.

Nathan-Wong crossed for a third try to make it 15-0 at half-time and put the Black Ferns Sevens on the verge of repeating their triumph from Moscow in 2013.

First-time finalists France were unable to find a way through the resolute New Zealand defence and it was left to Blyde, the reigning World Rugby Women’s Sevens Player of the Year, to score two quick-fire tries that sealed her hat-trick and put the finishing touch on their 27th consecutive victory.

She also pulled clear of America's Naya Tapper in the race for the HSBC Top Try Scorer award.

"It doesn’t get any better," Goss, one of four players to be part of New Zealand's two Rugby World Cup Sevens successes, said.

"I’m so grateful to be here and for a performance like that and for Michaela Blyde to stand up like that.

"France are a quality team and for them not to score against us is a proud effort from the sisters.

"We had one goal and that was to take the trophy back and I can’t wait to go home and show it to the New Zealand public."

Goss received the UL Mark of Excellence award before lifting the coveted trophy.

France's Anne Cecile Ciofani was named the Tudor Women's Breakthrough Player of the Tournament accolade after impressing in her first Rugby World Cup Sevens and scoring the last-gasp winning try against Australia in a 19-12 semi-final victory.

World Rugby Sevens Series champions Australia bounced back from their heartbreaking loss to France to claim the bronze medal with a 24-14 victory over the US in front of a crowd of more than 33,000.

Evania Pelite and Cassie Staples gave Australia the perfect start but two tries from Tapper kept the hosts in the hunt to repeat their third-place finish from Moscow in 2013.

Ellia Green, though, also scored twice, with one of them seeing her collect a sublime cross-field kick from Charlotte Caslick in diving over the line.

Spain claimed fifth place with a narrow 12-7 win over Ireland, who were already guaranteed their best-ever finish in Rugby World Cup Sevens history after beating Russia 20-15 earlier in the day.

England won the Challenge competition, securing ninth place overall with a 31-5 defeat of Japan in the final.

There was heartbreak for the US in the quarter-final of the men’s competition as they were beaten in extra-time 24-19 by England in a thrilling match.

England are now due to face recently crowned World Rugby Sevens Series champions South Africa in the semi-final after they convincingly dispatched Scotland by a score of 36-5 in the first quarter-final of the day.

Fiji rewarded their large contingent of vociferous fans with a scintillating display of attacking rugby sevens to record a 43-7 victory over Argentina.

It sets up a semi-final clash with neighbours New Zealand, who overcame France 12-7 in a tight contest.