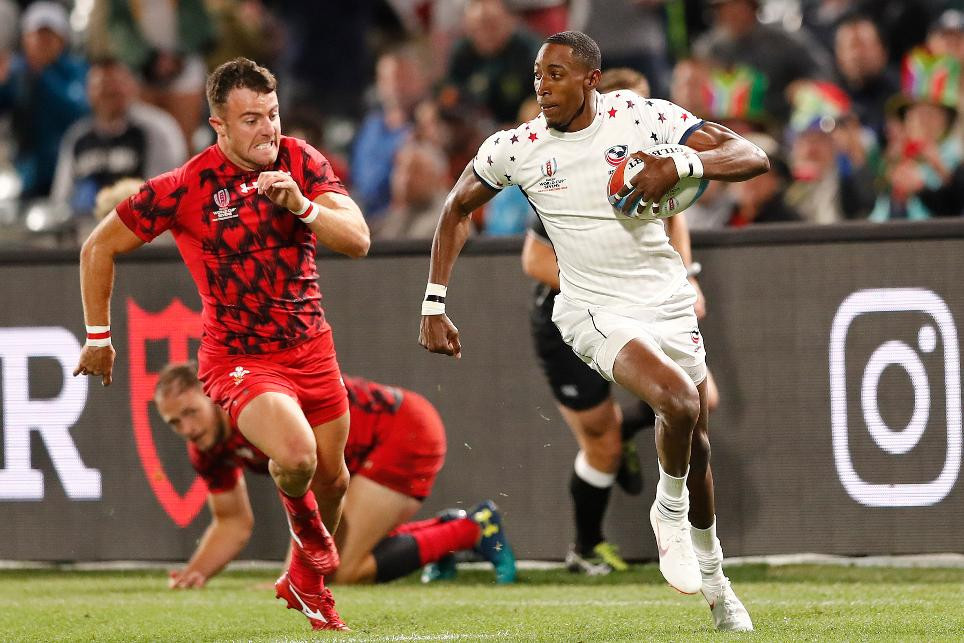 Hosts United States booked their place in the quarter-finals of the Rugby World Cup Sevens men’s tournament with heavyweights Fiji and New Zealand as Australia bowed out of the competition.

Eight top seeds were assured of places in the last 16 of the competition due to their placing in the World Rugby Sevens Series, with the remaining teams forced to play a qualifier to progress.

The US team were able to watch their future opponents Wales claim a 33-12 win over Zimbabwe at the AT&T Park in San Francisco's Bay Area to set-up a meeting later in the day.

A strong performance saw the hosts untroubled as they overcame their European opponents 35-0 to reach the quarter-finals.

They are now due to face the challenge of England, who battled to a tightly fought 19-15 win over Samoa.

Olympic champions Fiji produced a strong start to their campaign as they beat Japan 35-10, with their reward a meeting with Argentina, who overcame Canada 28-0.

New Zealand were also untroubled as the defending champions claimed a 29-5 success against Russia.

They would have expected to face neighbours Australia in the last eight but the sixth seeds suffered the surprise loss of the round.

The Australia team fell to a 22-17 loss against 11th seeds France, who had thrashed Jamaica 50-0 in the qualifying round earlier in the day.

South Africa clinched a comfortable 45-7 victory in the match to set-up a tie against Scotland, who overcame Kenya 31-26 in a battle of the eighth and ninth seeded teams.

The semi-final line-up of the women’s tournament were also decided on a packed opening day of action.

Ireland produced a surprise result when they beat England 19-14 in the last 16 only to suffer a 45-0 quarter-final loss to defending champions New Zealand.

New Zealand are now scheduled to face US, the home team having beaten Russia 33-17 in their last eight match.

Third seeds Canada missed out on a semi-final spot as France’s women’s team replicated their men’s side in delivering an upset.

France clinched a 24-19 victory to take them into the last four of the competition.

They are now set to face Australia after the second seeds brushed aside Spain 34-0 in their quarter-final match.

The women’s competition is due to conclude tomorrow with the quarter-finals of the men’s event also set to take place.

Men’s action is scheduled to conclude on Sunday (July 22).

It is the first time the tournament has been held with a straight knock-out format.