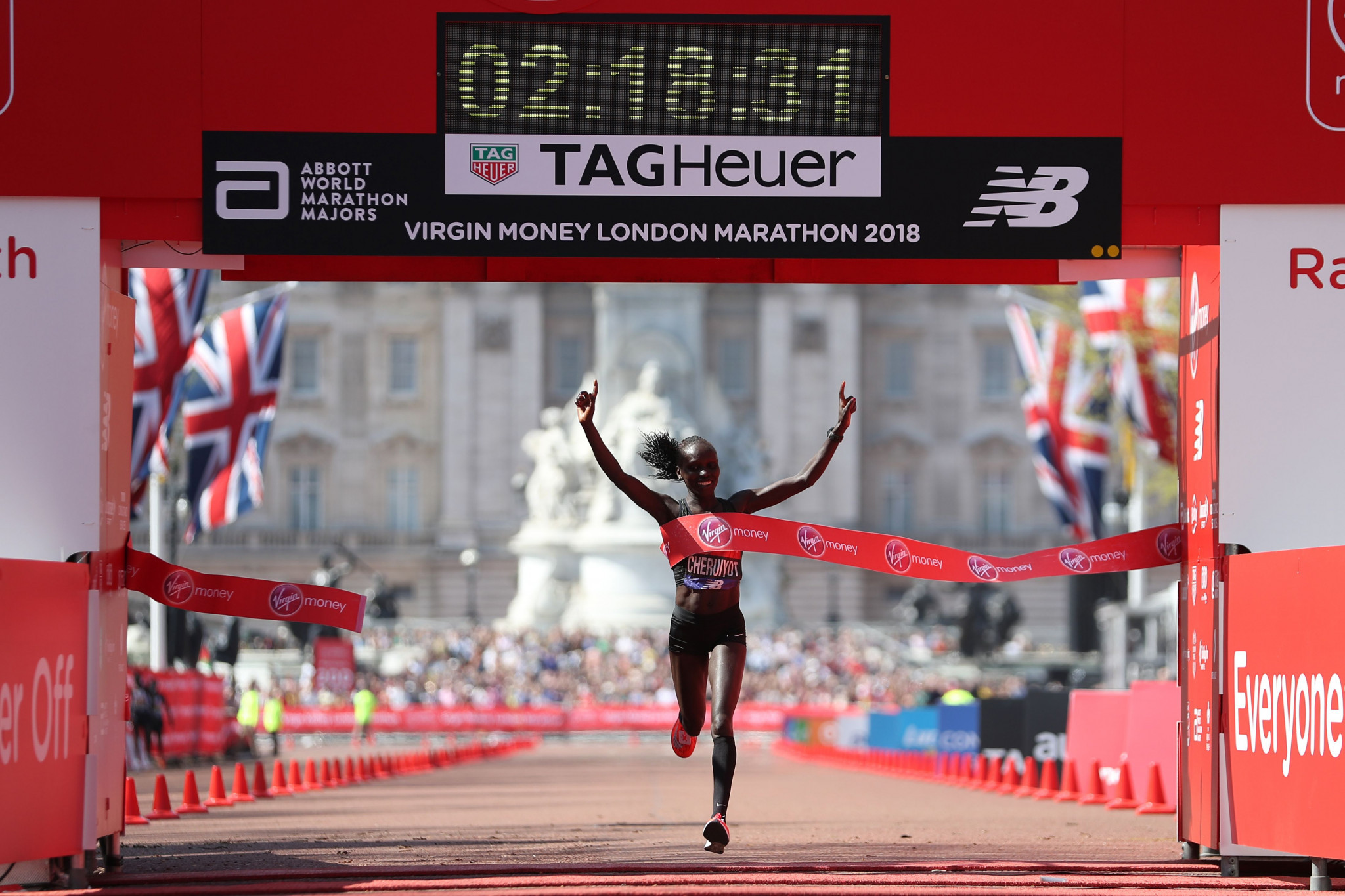 Kipchoge justified his status as the pre-event favourite, and arguably the best marathon runner of all time, with a typically-composed display as he added to his triumphs in 2015 and 2016 in 2 hours 04min 17sec.

The Olympic champion always looked in control from the moment the race began and he broke clear of Tola Shura Kitata of Ethiopia in the final quarter on his way to sealing another dominant triumph on the streets of London.

Kitata was second, clocking 2:04:49, while Britain's Sir Mo Farah achieved one of his targets as he broke Steve Jones' British record, which had stood for 33 years, with a time of 2:06.21.

Following a lengthy delay, the three times were confirmed to be up to 10 seconds quicker than originally stated as organisers admitted a clerical error had led to them being displayed incorrectly.

Kipchoge and the rest of the chasing men's pack signalled their intention from the outset and the Kenyan legend went through the halfway stage at 61:00, well on course to break Denis Kimetto of Ethiopia's world record of 2:02:57.

The temperatures, which reached a peak of 22 degrees Celsius, among the hottest ever recorded at the London Marathon, eventually took their toll and put paid to Kipchoge's attempt at lowering the mark.

The Kenyan star then focused on his prime ambition of winning the race, which he did in style, powering ahead and crossing the line more than 30 seconds ahead of Kitata.

"I enjoyed the race very much," said Kipchoge.

"I still enjoy the win, and I’m happy to be able to win for the third time in London.

"I had to fight for the last kilometre and I enjoyed running with people very much, to run alone is not sport."

Track supremo Cheruiyot, the reigning Olympic 5,000 metres champion running only her third marathon, took advantage of a fading Mary Keitany to claim a commanding solo win in a time of 2:18:31 as Paula Radcliffe's world record remained in tact.

The time from the 33-year-old, fourth here last year, may not have been as quick as many had predicted but it was still a huge personal best and the fourth fastest of all time.

Cheruiyot, one minute and 40 seconds behind at halfway, led a Kenyan one-two as Brigid Kosgei was second in 2:20:13,

Much of the talk before the women's race centered on whether Keitany could break Radcliffe's longstanding world record of 2:15:25, set here 15 years ago.

She was made to pay, though, for an overly-fast start as she struggled in the second half and eventually finished fifth.

A similar fate befell Ethiopia's Tirunesh Dibaba, tipped as the main challenger to Keitany in the lead-up to the event, as she dropped out at around the 30 kilometres mark.

While the others began to pay the price for going off too quickly - Keitany was 46 seconds up on Radcliffe's time at halfway - Cheruiyot slowly made her way through the field and passed a wavering Keitany.

As the temperatures continued to rise, as did the Kenyan's pace as she defied the weather to clinch the best marathon victory of her career.

"The weather was perfect for me as I don’t like cold weather," said Cheruiyot.

"I was patient and patience pays, that is why I won today."