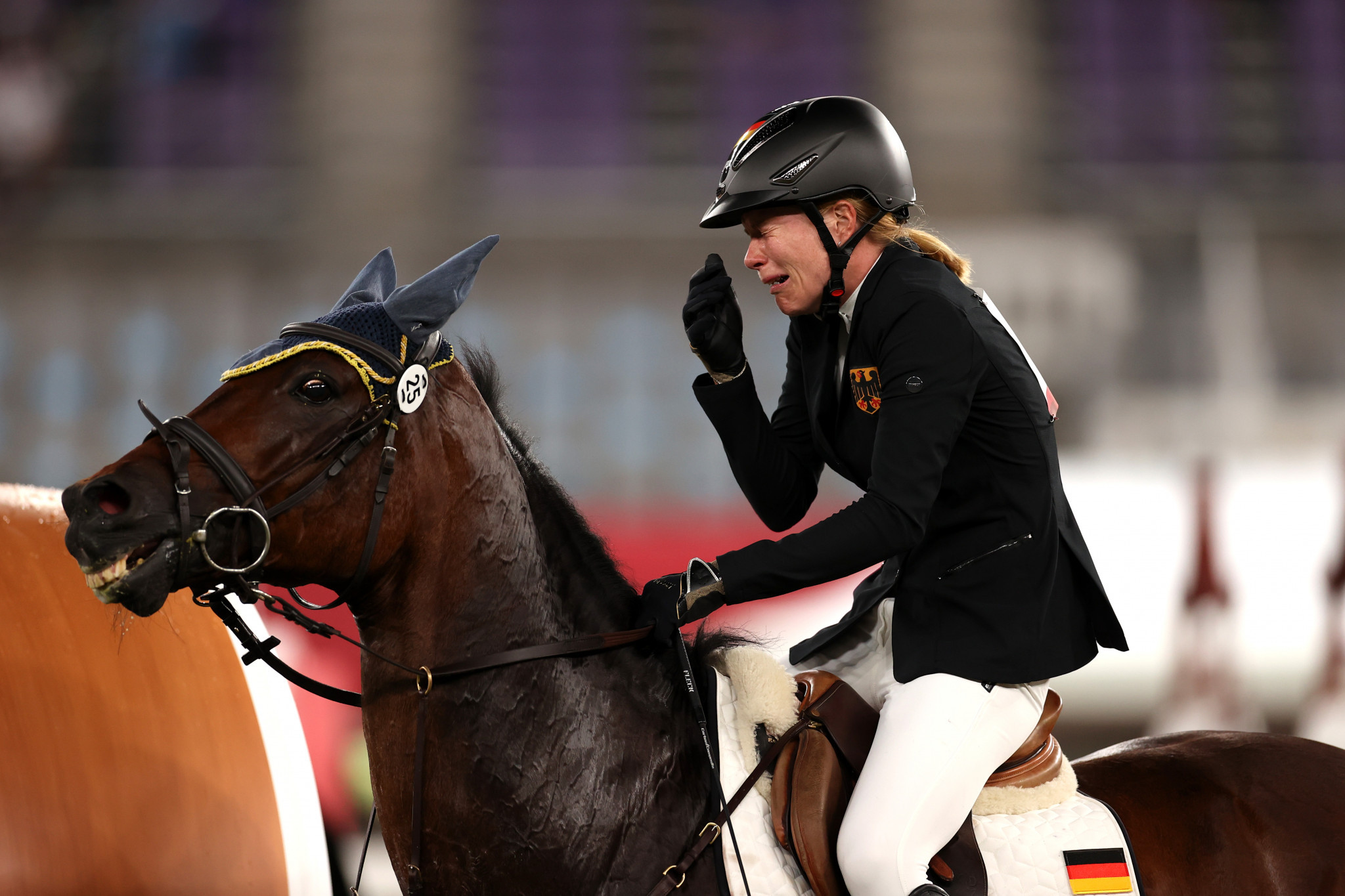 Germany’s modern pentathlon team coach Kim Raisner has been disqualified from the rest of the Olympics for "appearing to strike a horse with her fist."

Raisner was said to have punched Saint Boy, ridden by Annika Schleu during the riding phase of the women’s competition yesterday.

The International Modern Pentathlon Union (UIPM) said it had reviewed video footage of the incident which occurred as Schleu left the arena in tears.

Schleu had been on top of the leaderboard before the riding event, but Saint Boy refused to jump and she was eliminated.

A UIPM statement said: "The UIPM Executive Board (EB) has given a black card to the Germany team coach Kim Raisner, disqualifying her from the remainder of the Tokyo 2020 Olympic Games.

"The EB reviewed video footage that showed Ms Raisner appearing to strike the horse Saint Boy, ridden by Annika Schleu, with her fist during the riding discipline of the women's modern pentathlon competition.

"Her actions were deemed to be in violation of the UIPM Competition Rules, which are applied to all recognised modern pentathlon competitions including the Olympic Games."

UIPM President Klaus Schormann said: "In all these years not a single situation happened like yesterday.

"I will not speak about the behaviour of the trainer which was unbelievable, therefore we have given the black card to her and we will have other investigations.

"It was crystal clear that you have to act if you see the video, she was pushing the horse what was already elimination, you are not allowed from outside to touch the horse so there are some other elements.

"She completely did wrong, we had to act. She is a very experienced long time international trainer. She knows exactly that she made big, big mistake.

"I am sure she is not happy about it herself. I know her a long time.

"Therefore it was a need to act and to show clearly, this is not acceptable, we are a sport for fairness and we are not a sport with rude performances - this is not possible.

"It would be much more better from the media to support what we have achieved to see how the athletes are performing and not to concentrate only on one case. The focus needs to be fair for all the athletes."

The German Olympic Sports Confederation (DOSB) has called upon the UIPM to re-examine the regulations of the competition in the wake of yesterday’s events.

The DOSB said in a statement: "Today's competition in modern pentathlon riding was partly characterised by scenes that damage the image of the sport."

"In modern pentathlon, the horses are allocated by a lottery.

The DOSB added: "Numerous recognisable excessive demands on horse-rider combinations should be an urgent reason for the international association to change the rules.

"It needs to be redesigned to protect horse and rider."

It insisted that "the welfare of animals and fair competitions for the athletes must be the focus."

Schormann claimed the German team told him: "Annika warmed up OK with no problem everything was fine.

"There was not anything to say that the horses had some problems.

"It was only when the horse came down and saw the arena then this trauma we can say came back to the horse.

"We don’t know why the horse went crazy.

"You know that Annika is one of our best riders and the Russian lady is also one of the best so it was a special situation.

"We feel very sorry for both athletes not only for Annika but also for the Russian."

Schormann was referring to Gulnaz Gubaydullina of the Russian Olympic Committee, who had experienced similar problems on the same horse.

"We know what we have to do, from the outside it is very easy to say something," Schormann added.

"We are able to handle our sport and we are working together.

“Nobody has to ask us to do something, we are acting not reacting.

"We are analysing all our competitions and also we have briefed the sport department of the International Olympic Committee."

The day before the competition, Schleu admitted: "We don’t know the horse and in the riding, dreams can just die.

"You can go from first to last place."

After the round, Schleu revealed she had even consulted the owner during the familiarisation process before beginning the round, adding she "wanted to be sensitive to the horse but he really didn’t want to go."