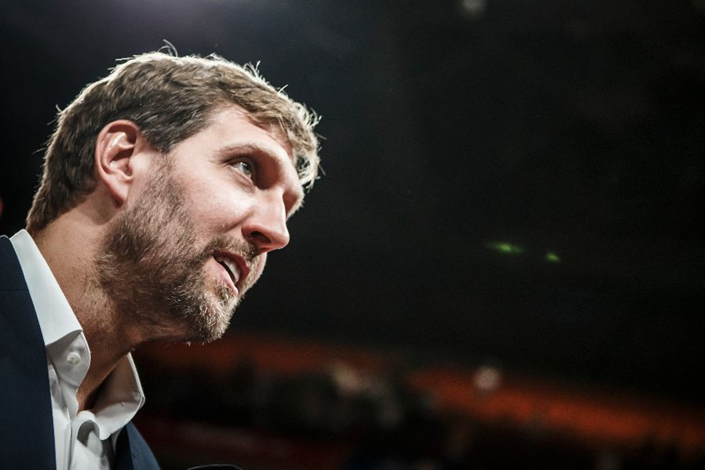 The appointment was made at the first meeting of the FIBA Central Board for the 2019-2023 term of office, under the leadership of newly-elected President Hamane Niang, in Beijing.

Nowitzki also becomes a member of the FIBA Central Board.

The 41-year-old has had an illustrious playing career for Germany and was consistently a star performer at numerous FIBA tournaments for more than 15 years.

He led his country to its best-ever result at a FIBA World Cup in 2002, finishing in third place, the nation's only podium finish at global level.

Nowitzki also led Germany's run to the final of EuroBasket in 2005, finishing in second place.

In 2011, after leading the Dallas Mavericks to a first-ever NBA championship, he returned to the German national team at the EuroBasket in Lithuania.

He would go on to make his final appearance for his country in the 2015 edition of Europe's biggest basketball competition, playing on home soil in Berlin.

Earlier this year, Nowitzki finished his illustrious NBA playing career, with which he spent all 21 years with the Mavericks.

Most recently he joined China's Yao Ming and American Kobe Bryant as official Global Ambassadors of the 2019 FIBA World Cup in China.

"Dirk is one of the greatest players to have ever played basketball, and is highly respected worldwide," FIBA secretary general Andreas Zagklis said.

"He has had an exceptional career both with the NBA and with his national team, and will bring with him a huge amount of experience and knowledge.

"He is the perfect person for this position and we look forward to working closely with him over the next term of office."

Upon being appointed chair of the FIBA Players' Commission, Nowitzki said: "I feel honoured to have been given this opportunity and I am looking forward to representing players within FIBA and bringing their voices to the table where decisions are made.

"I am excited to take on this new role and work alongside both active and retired players around the world to ensure players interests are heard to continue the development of our beloved sport."

In 2014, FIBA announced the creation of the first-ever Players' Commission that would represent the interests of the sport's main actors.

This was implemented as part of the improvements made to FIBA's governance and in line with the ongoing efforts to include stakeholders in the decision-making process.

Vlade Divac was appointed as the first chairman for the 2014-2019 term.

This Commission is made up of 14 members and the chairman serves on the FIBA Central Board.

Nowitzki was among various key appointments made to complete the composition of the FIBA Central Board.

The United States' Mark Tatum, Deputy Commissioner of the NBA, will keep his position as representative of the NBA.

The new Central Board was recently appointed during the FIBA Congress held at the end of last month in Beijing.

Thirteen members were announced, along with a new President, treasurer and secretary general.

The FIBA Central Board has now co-opted two new members to join them – Yao and the Philippines' Manuel V. Pangilinan.

It now counts 25 members in total.

The FIBA Central Board also appointed members to the Executive Committee.

The Central Board meeting proceeded with the appointment of three FIBA vice-presidents: Sheikh Saud, Demirel and Shipley.

Also proposed was the appointment of newly-named FIBA Honorary President Horacio Muratore, after presiding over the world governing body from 2014 to 2019, as the new President of the International Basketball Foundation (IBF).

The appointment was confirmed by the IBF Board.

Muratore succeeds Sheikh Saud, who took over the role in 2017 when FIBA Honorary President Yvan Mainini retired his position due to health reasons at the time.

"I am very pleased to be taking on this new role with the IBF," Muratore said.

"Sport is a powerful tool and the IBF has made a big impact on numerous communities in its short history.

"My goal is to further continue this great work with new opportunities, whilst always promoting the values and heritage of our great game."

The IBF is the social, educational and legacy arm of FIBA that addresses the role of sports and particularly basketball in society, preserving and promoting the sport’s values and its cultural heritage.

It was founded in 2008 and currently has 15 ongoing projects worldwide that also include Mini Basketball and 3x3 Basketball for Good Tournaments.

The FIBA Central Board also reappointed Australia’s Patrick Hunt as the President of the World Association of Basketball Coaches.

Other key appointments made during the meeting included those of the Commissions and judicial bodies such as the Appeals’ Panel and the Basketball Arbitral Tribunal.