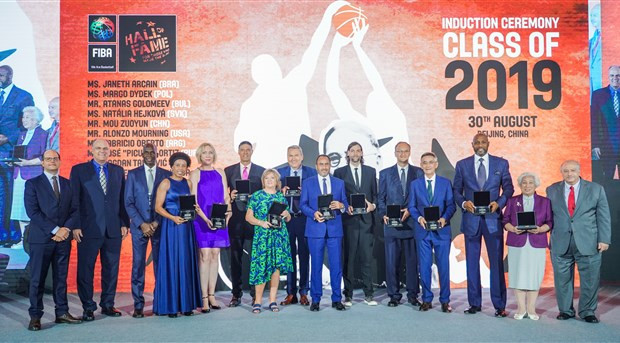 The Class of 2019 were inducted during the FIBA Congress, held on the eve of the Basketball World Cup in China.

Eight former players and three coaches, selected from a list of over 150 candidates, were recognised by the sport's worldwide governing body.

American former NBA star Alonzo Mourning, a member of the United States team which won gold at Sydney 2000, and Athens 2004 champion Fabricio Oberto of Argentina were among those inducted at today's ceremony.

They are joined on the list by Puerto Rico's José Ortiz, who had a two-year spell with the Utah Jazz, and Egypt's Mohsen Medhat Warda, who represented his country at the 1984 Olympics in Los Angeles.

Brazil's double Olympic medallist Janeth Arcain and Poland's Margo Dydek - who died in 2011 and was inducted posthumously - were the two female players on the list.

Both had spells in the Women's NBA - Arcain with the Houston Comets and Dydek with the Utah Starzz, San Antonio Silver Stars, Connecticut Sun and Los Angeles Sparks.

Natalia Hejkova of Slovakia and Montenegro's Bogdan Tanjevic were the coaches selected, along with China's Mou Zuoyun, inducted posthumously.

"We are very proud to welcome all of these great basketball personalities into FIBA's Hall of Fame," said outgoing FIBA President Horacio Muratore.

"Their contributions on and off the court have helped impact our sport in the most positive way imaginable.

"Through their achievements, dedication and countless efforts, they have also assisted basketball's growth across the world.

"My sincere congratulations go to them all for receiving this well-deserved honour."