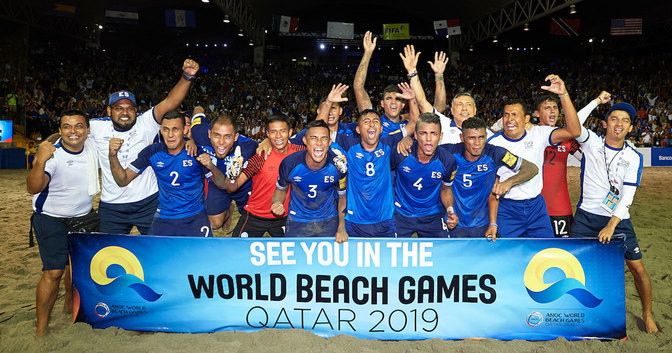 Mexico and El Salvador booked their place at the Association of National Olympic Committees (ANOC) World Beach Games in Qatar by reaching the final of the Confederation of North, Central American and Caribbean Association Football (CONCACAF) qualifier.

Two spots in the men's beach soccer tournament in Doha were available at the CONCACAF qualifier in El Salvador's capital San Salvador.

CONCACAF beach soccer champions Mexico had been favourites to reach the World Beach Games but they had to work hard for victory against the United States.

Ramon Maldonando and Jose Vizcarra twice put the Mexicans ahead, only for a Jason Leopoldo brace to take the game to a penalty shootout.

Benjamín Jesús Mosco scored the winning goal in the penalty shootout to secure Mexico's place in the final.

Hosts El Salvador will join Mexico at the World Beach Games in Doha, due to run from October 12 to 16, following a narrow win against 2017 CONCACAF champions Panama in the last four.

Oscar Andres Cruz and Exon Perdomo bagged braces to secure a 4-2 triumph for Rudis Gallos' side.

Mexico remain on course to grab the only women's ticket for the World Beach Games after defeating The Bahamas 7-2.

The women's tournament involves a round-robin format with only the group winners securing a place in Qatar.

Fatima Leyva and Karla Pérez grabbed two goals apiece as the Mexicans won a second successive game to sit top of the standings.

A victory against El Salvador on the final day of competition tomorrow would seal their World Beach Games berth.

The US women, making their international debut at the qualifier, earned their first victory by defeating El Salvador 9-6.

The hosts had led 2-0 and 3-1 before the US fought back to win with Samantha Witteman netting a hat-trick.