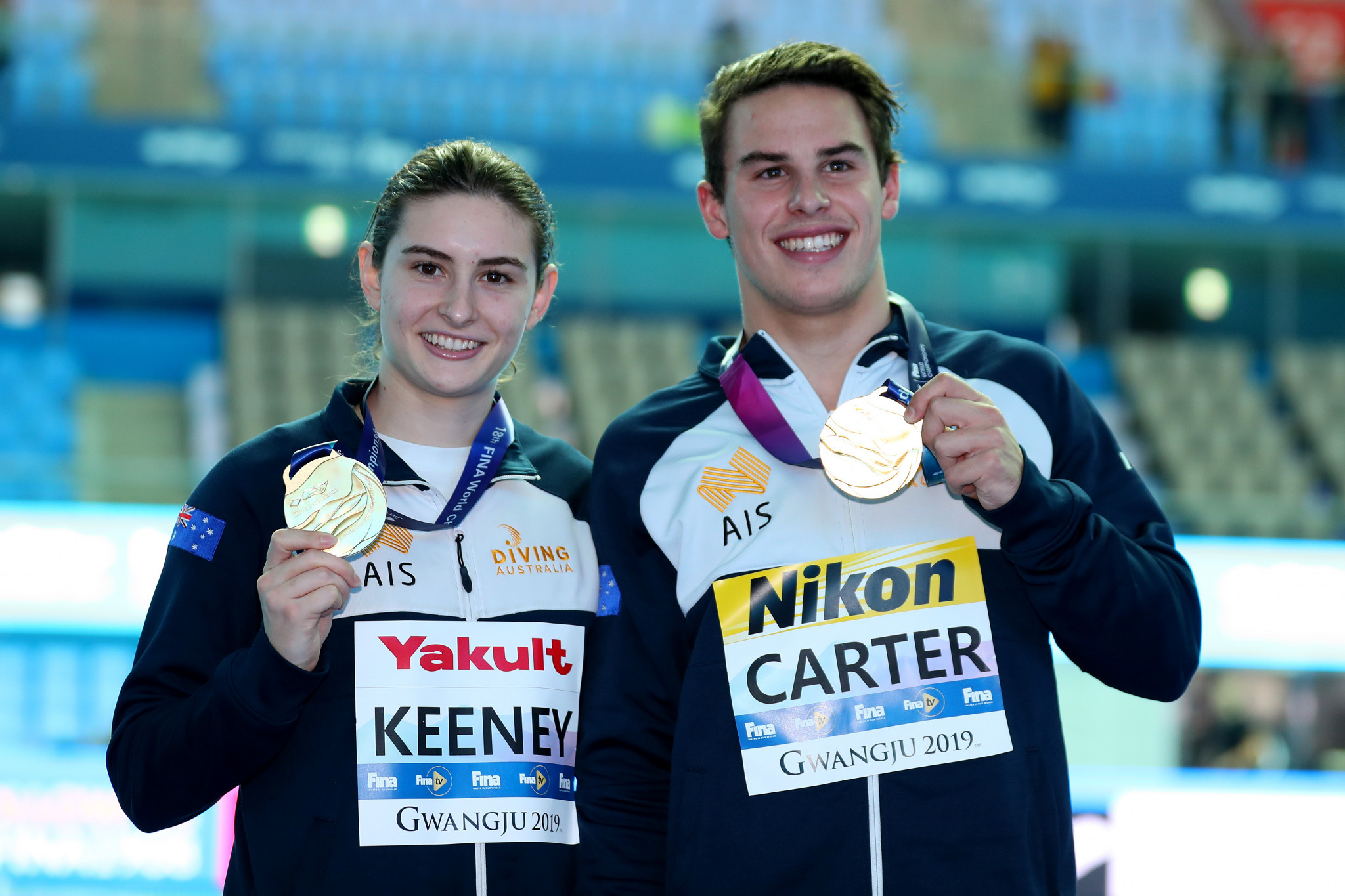 Australian duo Matthew Carter and Maddison Keeney claimed gold at the World Aquatics Championships here in Gwangju despite being put together just a couple of hours before the mixed 3m synchro springboard final had been due to begin.

Keeney had qualified for the final alongside usual partner Domonic Bedggood, but after his last-minute withdrawal, Carter was thrown into the spotlight.

China had taken 11 golds from the opening 11 diving events but Hao Yang and Yani Chang, who had topped the rankings after the preliminary rounds, withdrew, opening the door for a new champion.

After collecting their gold medals, Keeney said: "We are very pleased.

"We haven't dived together before so this was the first time we have trained and competed together.

"We completely exceeded our expectation."

The Australian pair won by the narrowest of margins at Nambu University Municipal Aquatics Center, with their final dive clinching the gold medal by just 0.78 points.

They topped the podium on 304.86 points as  Canadians Francois Imbeau-Dulac and Jennifer Abel were pushed into silver with a score of 304.08.

Keeney added: "We got to the pool at about 1.30pm and started competing just after 3pm so we had two hours together.

"The person I was meant to dive with pulled out but thankfully Matt is so talented and can change his technique to suit anyone.

"We didn't think about the gold medal but just had to go out there and see what we could do."

Germans Lou Massenberg and Tina Punzel took bronze on 301.62 points as Britons Tom Daley and Grace Reid finished in an agonising fourth spot after dropping points in the fourth round.

"When you don't come away with a medal you are obviously disappointed but I thought we hung in there pretty well," said Daley.

"We missed our fourth-round dive which put us a little bit out of contention for the medals but we had to keep fighting until the end as you never know what might happen.

"We are a bit gutted but at the same time we have to be happy with some of our dives."

China climbed back to the top of the medal charts in the men's 10m platform final as Jian Yang led Hao Yang in a Chinese 1-2.

Hao Yang recorded six perfect 10 scores in round four but it was his compatriot who was more consistent throughout the final.

Aleksandr Maltsev and Mayya Gurbanberdieva impressed the judges with a score of 92.9667 for gold in the mixed final with Italians Giorgio Minisini and Manila Flamini taking the silver medal on 91.8333 points.

The bronze went to Japanese pair Atsushi Abe and Yumi Adache on 90.4000 points.

In the water polo, the Netherlands edged out Canada 5-4 as the crossover matches of the women's draw took place.

Australia recorded a 13-3 win against Kazakhstan.

South Africa defeated hosts South Korea 26-3 to set up a classification match with Japan, 21-9 winners against Cuba, for 13th place on Tuesday.