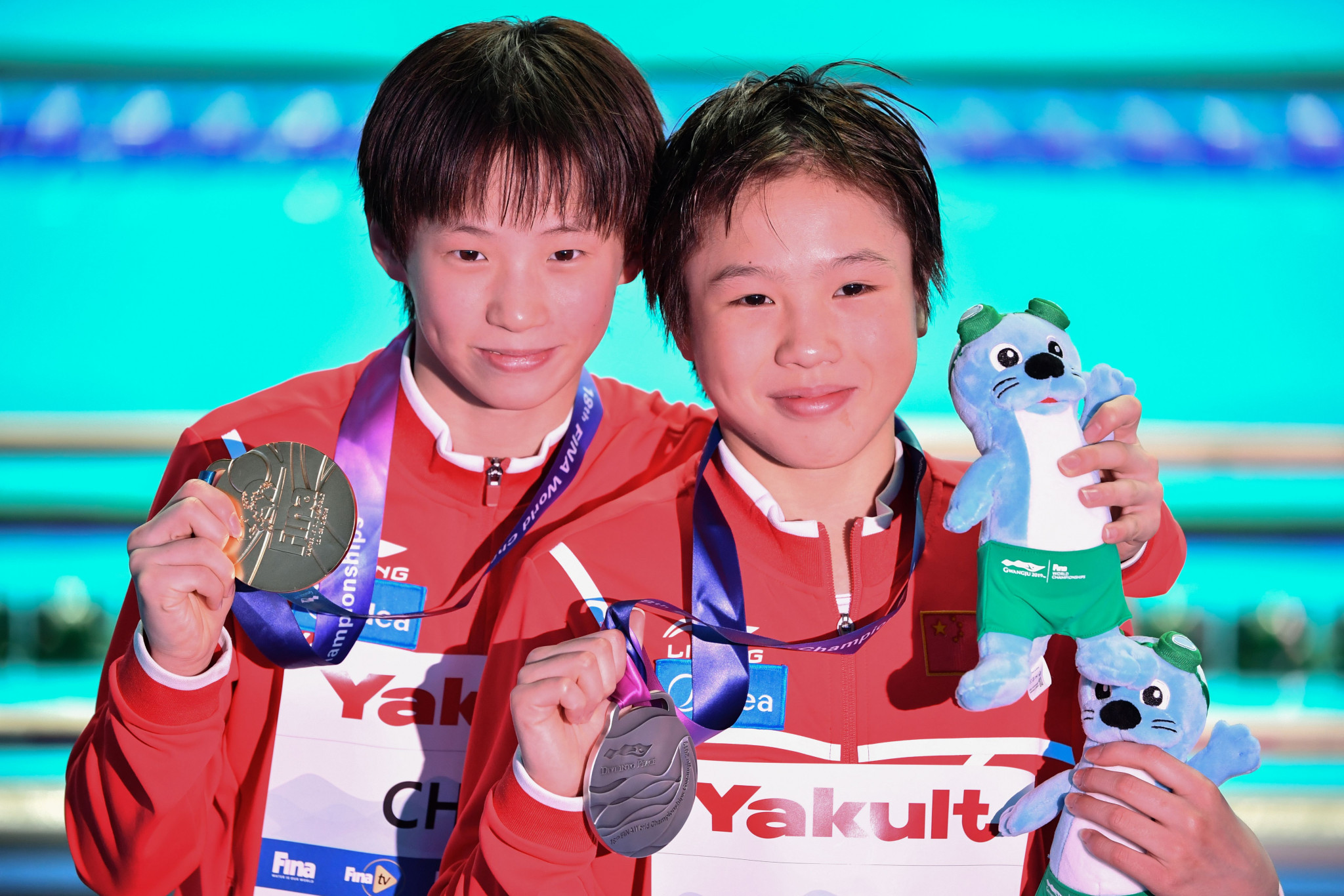 Thirteen-year-old pair Chen Yuxi and Lu Wei claimed a 1-2 in the women's 10 metres platform at the World Aquatics Championships as China's diving domination continued in Gwangju.

The Asian giant has now won all nine events held so far at the Nambu University Municipal Aquatics Center with just four left to come.

This was Lu's second medal of the Championships after she won gold in the women's synchronised 10m platform alongside 15-year-old Zhang Jiaqi.

Delaney Schnell of the United States was given a score of 364.20 for bronze in an event that did not include China's reigning Olympic champion Ren Qian, herself only 18, or Malaysia's defending world champion Cheong Jun Hoong.

Cunha has won a hat-trick of global golds over the longest distance of 25km and prevailed over the shortest today at the Yeosu Expo Ocean Park.

She won in a time of 57min 56sec on the South Korean course to improve on the two World Championship bronze medals she has won in this event.

France's Aurélie Muller won a second successive silver as she was unable to add to her two world titles, clocking 57:57.

Two bronze medals were awarded after technology and the human eye could not split American Hannah Moore and Germany's Leonie Beck.

Cunha said she was happy to improve upon her fifth-place finish in the 10km earlier in the Championships.

"I really wasn't happy with that result," she said.

"Today my strategy was to swim a bit more relaxed in the first half.

"I was behind the girls until the third lap when I started to move up.

"In the final lap, I just got myself to where I needed to be."

She scored 97.1333 for a big victory and adds to the duet technical routine title already won with Svetlana Kolesnichenko in Gwangju.

Spain's Ona Carbonell won her second silver at the Championships following her second place in the solo technical routine, scoring 95.0023.

Yukiko Inui, the solo technical routine bronze medallist, also won a second medal of the same colour with a score of 93.2000.

Russia have now won five of the six artistic swimming categories contested and did not compete in the highlight routine final won by Ukraine.

"Free routine is more emotional than the technical one," said Romashina, who performed a display called Carmen which was based on opera.

"You have more space and time for creation and improvisation.

"And I wanted the emotions to run high and the performance to inflame the audience."

Day six of the Championships also included the second matches of the men's water polo tournament at Nambu University.

In Group A Olympic champions Serbia thrashed hosts South Korea 22-2 to claim their first win after an opening draw with Montenegro.

Their neighbours drew for the second time, 10-10 with a Greek side who had beaten the Koreans first up.

Defending champions Croatia made it two wins from two in Group B by beating the United States 17-7.

Australia were able to move level with the Americans on two points by seeing off Kazakhstan 17-8.

In Group C, Hungary edged Spain 13-11 for a second success with New Zealand and South Africa playing out an 8-8 draw after both had started with defeats.

Group D saw a second win for Italy, 9-7 over Japan, with Germany beating winless Brazil 15-8 to move just a point behind.

The top side in each group will qualify for the quarter-finals, with those placed second and third playing-off for the right to join them.

The open water team event will be held as well as the final group matches in the women's water polo tournament.

The Championships, the flagship event of the International Swimming Federation, will run until July 28.