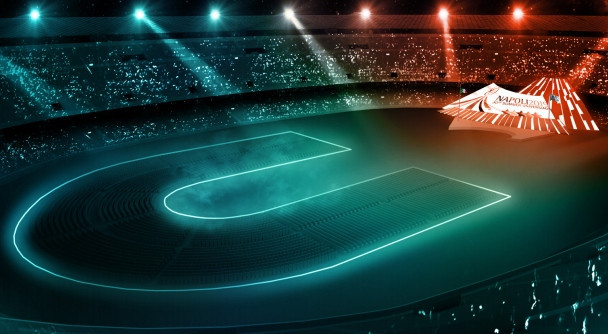 Summer Universiade 2019 organisers will recreate the Bay of Naples in the Stadio San Paolo tomorrow when the Opening Ceremony is set to feature mermaids, rap music, light shows, fireworks and even a performance from Andrea Bocelli.

In the words of its creators, it will give a "big hug" to the competitors in the Universiade.

The mermaid Partenope, mascot of these Games, will be portrayed by free diver Mariafelicia Carraturo, who holds the world record for the deepest descent.

This will set the tone for a Ceremony in which the 800 performers will make use of what creative director Marco Balich has called "a super technological stage for a contemporary postcard of Naples".

The Italian flag is due to be brought in by Paralympic fencing champion Bebe Vio.

She will wear a creation by Georgio Armani in a moment that is bound to recall the arrival of Carla Bruni with the flag at the 2006 Winter Olympics in Turin.

These Ceremonies are produced by the same company.

Organisers have promised a dramatic show of light and music which is light years away in sophistication from the simple ceremonial of the first Universiade held in Turin back in 1959.

Tomorrow's Ceremony will involve some 800 participants and the cast will be drawn from 19 nationalities.

"We are very proud of what we are about to stage," Balich said.

"Sometimes you can do with the heart some ideas, you can do something beautiful and cause major emotions.

"The budget helps but it is not essential."

"For a University Games, this size and this kind of show is very appropriate.

"Otherwise not many cities can afford to do this.

"The University Games can be a beautiful celebration of culture.

"To make it more affordable is a good thing for the future of the Movement."

Ceremony director Lida Castelli insisted  that previous Ceremonies were not an inspiration when she came up with her concept for the Games.

"We took the seeds from Napoli’," she said.

"This is an open place which we will start to embrace with the creation of the Bay in the stadium."

Some 40 refugee migrants who have settled in the region will also take part in the Opening Ceremony.

"This is an important statement," said Castelli.

"It will remind us that we are all migrants and all part of the same world."

Spectators will enjoy spotting some famous champions of Italian sport during the formal part of the Ceremony.

Also expect a modern variation or two during the traditional student hymn Gaudeamus Igitur which will performed by the choir of the Teatro dell Opera di Verdi from Salerno.

Incidentally, the Stadio San Paolo itself opened in 1959 so it shares its 60th birthday with the Universiade