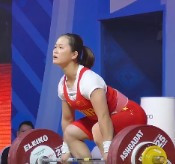 China’s Deng Wei lived up to her billing as one of the world’s best - and most popular - weightlifters with three world records in only four lifts as she won the women’s 64 kilograms, the only competitive event on day three of the International Weightlifting Federation (IWF) World Cup in Fuzhou.

In the most dominant display of the competition Deng, a local hero here, broke her own world records in the snatch, clean and jerk and total.

Once again North Korean lifters were on the podium looking up at Deng Wei as the Chinese flag was raised at the victory ceremony.

In her last three IWF World Championships and in the 2016 Olympic Games in Rio de Janeiro, Deng, who was 26 this month, has won the gold medal while North Koreans have finished second or third.

In 2014, 2015 and 2016 it was Choe Hyo Sim, the Olympic silver medallist at 63kg, who dropped down to 59kg here in Fuzhou yesterday only to be beaten by another world-record-breaking Chinese lifter, Chen Guiming.

3 for 3 for Deng Wei 🇨🇳 and she's not messing about with this opening lift!

This time, as at the 2018 IWF World Championships in Ashgabat in Turkmenistan, the North Koreans put in two challengers - Rim Un Sim and Kim Hyo Sim.

In Ashgabat Rim was second, 13kg behind Deng, and Kim failed to make a total.

But that was nowhere near enough to challenge Deng, who did not start lifting until the North Koreans had finished.

Deng broke the snatch record with her second lift of 113kg and did not bother with her third.

She repeated the feat in the clean and jerk, making 141kg on her second attempt and forgoing her third lift.

Her total of 254kg was 19kg better than Rim, 22kg better than Kim, and 32kg clear of the fourth-placed Chinese Taipei athlete Chen Wen-Hei.

Among those cheering on Deng were a group of nine- and 10-year-olds from Luo Xing Zhong Xin Xiao Xue elementary school in Fuzhou, which runs a successful weightlifting programme.

Deng has visited the school and the youngsters had been to watch her train at the nearby Mawei Training Center before making their first visit to an international competition.

There was an easy victory for Mexico's Jennifer Cantu Iglesias in the women's 71kg, as she was the only entrant.

Iglesias lifted 49kg less than Deng Wei did in the lighter 64kg category, but she still won a first prize of $2,000 and a gold medal, and had her anthem played.