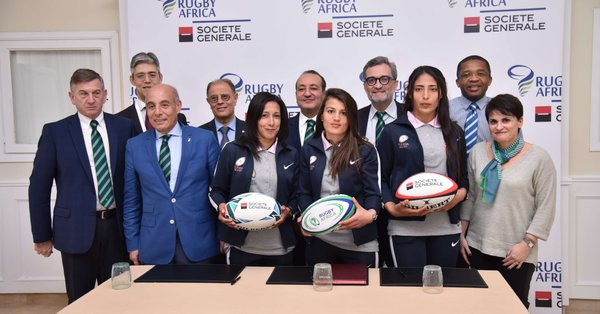 French bank Société Générale has signed a two-year agreement with Rugby Africa to help develop the sport across the continent.

The partnership will focus on World Rugby's Get into Rugby programme and the two official women's competitions in Africa, the Africa Women's Sevens and the Under-20 Barthès Trophy.

"This partnership is the continuation of two of our long-term commitments to rugby, of which we have been a reliable partner for over 30 years, and to Africa, with our Grow with Africa imitative, a programme central to our priorities that aims to promote the sustainable development of the continent," director of human resources and communications at Société Générale Caroline Guillaumin said.

The President of Rugby Africa Abdelaziz Bougja said the deal would "instil more vigour" in the development of African rugby.

"Currently, around half a million children and teenagers are introduced to rugby every year in Africa," he said.

"And the number of registered female players has more than tripled in recent years in Africa.

"This partnership is a decisive step forward for Rugby Africa as it brings the necessary investment to support this rapid growth.

"We thank Société Générale for the confidence they have placed in Rugby Africa and its federations."

The bank is already a partner to more than 450 amateur rugby clubs in France as well as the Top 14 professional league, the French Rugby Federation and the French national team.

Société Générale is also the official bank of the Rugby World Cup and a partner of both Rugby India and the Algerian Rugby Federation.