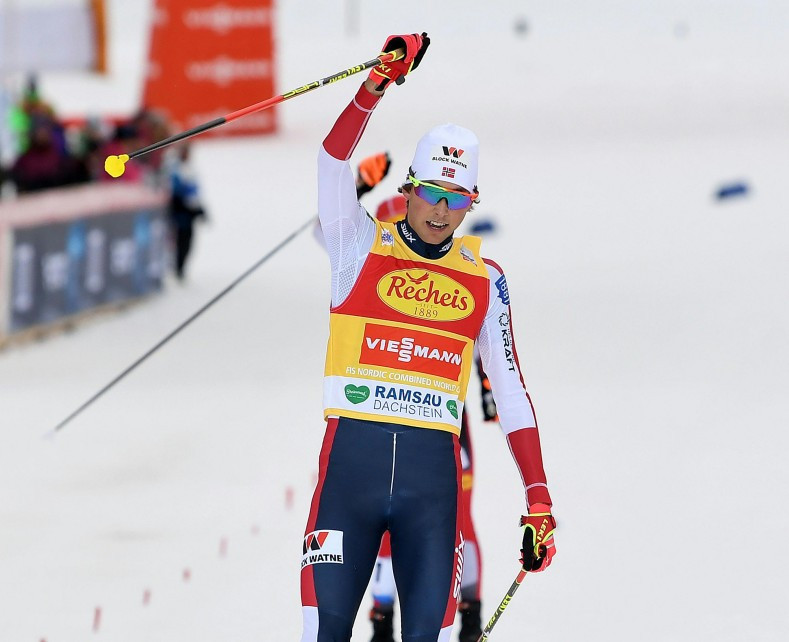 The 21-year-old has now won four consecutive events on the circuit and every race held since Austria's Mario Seidl claimed the season-opener in Ruka in Finland.

Strong winds and rain meant today's ski jumping phase was cancelled with yesterday's pre-competition round deciding the order for the 10 kilometre cross-country race.

Riiber, who won all three World Cups held as part of the Lillehammer Triple in Norway, was the second-best on the hill yesterday and started nine seconds behind Austria's home hope Franz-Josef Rehrl.

Both of the front two pre-planned to work together to keep the chasing pack at bay before Riiber pulled away to win in 23min 46.5sec.

Rehrl, who managed 95 metres on the hill for 133.1 jumping points yesterday, came home 2.3sec behind for his best-ever World Cup finish.

Germany's team Olympic champion Fabian Rießle was tenth after the jumping but moved up to take bronze, 19.1sec behind the Norwegian.

Riiber has increased his grip on the overall World Cup lead, and has 480 points.

Seidl is second on 218 with Germany's Johannes Rydzek, a four-time world champion last year and a double Olympic gold medallist, third on 215.

Another German in Eric Frenzel, a triple Olympic champion, finished 14th today after ending the jumping in 29th.

Watabe was sixth today after starting fourth after the jumping.

Another World Cup will be held in Ramsau am Dachstein tomorrow.