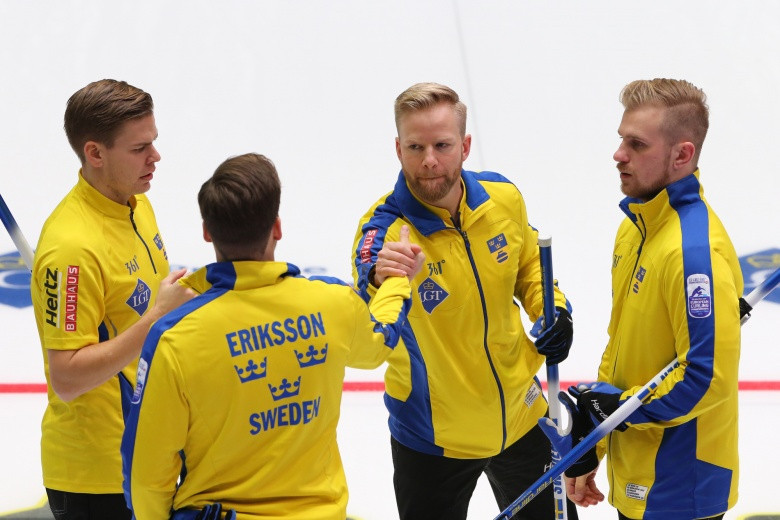 Sweden's world and defending champions remain the only team unbeaten so far in the men's round-robin play at the European Curling Championships in Tallinn, Estonia, while Switzerland share that distinction in the women's competition.

The team skipped by Niklas Edin earned a 5-3 win over Russia in their morning match at the Tondiraba Ice Hall and followed up with an 11-4 defeat of close rivals Italy that means they now top the standings with five wins from five matches.

They are followed by Italy and Scotland, who have both won four and lost one of their matches.

With the score at 6-4 to Sweden in their latest match, Italy gambled on trying to get back into it and Edin played a double take-out to score five points which won the game.

Afterwards Edin said: "It feels good to be on top on our own.

"We're playing really consistently so we're creating opportunities and when we take them, we score big as you saw at the end there."

The Netherlands remain at the bottom of the table without a win.

The two teams nearest The Netherlands at the foot of the table include Poland, who lost 11-2 to Scotland in six ends, thanks largely to a Scottish steal of six points in the sixth end.

Finland, who lost in the second session 9-7 to Switzerland, when, in the tenth end, their skip Wille Makela had a miss with his last stone, handing Switzerland a steal of one point and the win, are also struggling.

Meanwhile in the women's competition Switzerland are now the only unbeaten side after earning a dramatic 6-5 win over the previously unbeaten Russia team in their second game of the day.

With three ends remaining, Switzerland trailed 4-3, but a double score put them back in control.

Russia edged level in the penultimate end, however, before the Swiss finished the last end, and the match, one ahead.

Switzerland, who had beaten Olympic champions Sweden the day before, won their morning match against Finland 10-4.

"We didn't always have easy games, this one was a tough game actually, but we stayed in it and played our game so I'm really happy about the way we played.

"Every end was close and then their skip made an amazing shot, but we knew that we were playing great, so I never had a bad feeling."

Sweden had recovered their equilibrium with a 7-4 win over Latvia in their opening match of the day, but their fortunes dipped again as they lost in the evening, 6-4 to Denmark.

Defending champions Scotland, whose progress had stalled with two defeats on day two, got their day off to a winning start with a 9-7 result against Italy, but they lost their evening match to Latvia, 9-7.

Three teams are behind Switzerland with a 3-1 record now - Russia, Germany and Sweden.