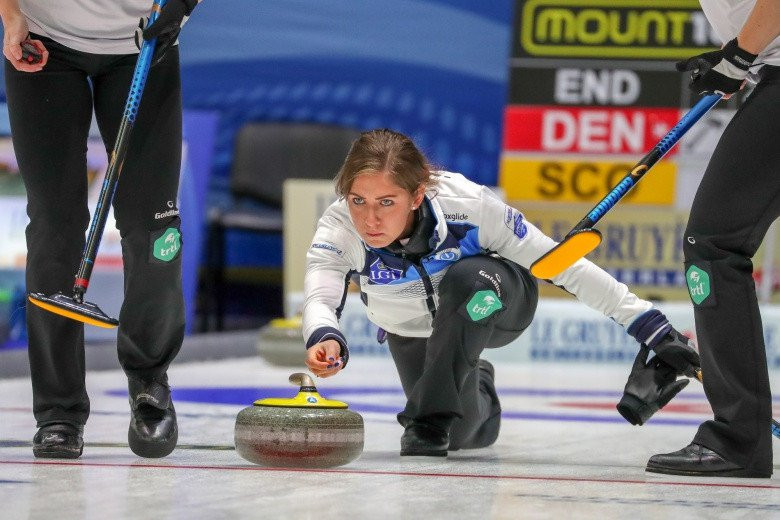 Scotland, the defending women's champions, suffered a day of setbacks as they were beaten by Olympic champions Sweden and the Czech Republic on the second day of the European Curling Championships in Tallinn.

Eve Muirhead's rink lost 10-4 to Sweden in the second of the morning session matches at the Tondiraba Ice Hall.

This was a re-run of last year's final and in the sixth end, Sweden's skip Anna Hasselborg played a controlled-weight hit to score three points and move into a 6-2 lead.

Later, in the ninth end, Hasselborg played another hit to score four points and take a 10-4 lead, at which point Scotland conceded.

Afterwards, Hasselborg said: "It could have gone either way, I think.

"It was a tight game, as always when you play this team.

"I just think we played a little bit better on each position.

"And they had to gamble a little bit."

Things went from bad to worse for the Scottish women in the evening session as they were beaten 8-7 by the Czech Republic.

But Sweden's day also went wrong as they were beaten 7-4 by Switzerland, who had beaten the Czech Republic 8-5 in their morning match.

All the evening session games were tight, with Germany beating Italy 8-7, Denmark earning a 6-5 win over Finland and Russia defeating Latvia 8-7.

Earlier in the day Latvia had beaten Denmark 8-6, Germany had defeated Finland 7-5 and Russia had beaten Italy 11-4.

Thus Switzerland and Russia are the only unbeaten women’s teams going into day three of the event.

In the men's event, Sweden's defending champions - and world champions - maintained their unbeaten status after two days thanks to an 11-2 defeat of Poland.

Italy, who beat Norway 7-5, are the only other unbeaten men's team in the round-robin following Scotland's 8-7 defeat by Russia.

In the two other men's matches played today, Switzerland beat The Netherlands 9-3, while Germany defeated Finland 7-3.