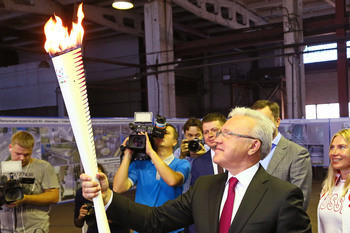 The Krasnoyarsk 2019 Winter Universiade flame will be lit at a special ceremony here tomorrow as cities and universities around the world prepare to celebrate the International Day of University Sport.

The Ceremony, which will take place at the University of Turin, will mark the official start of the Torch Relay featuring 650 torchbearers.

Once the flame is lit, the relay will see it pass through former Universiade host cities Almaty in Kazakhstan on September 24 and Harbin in China two days later.

Following that it will pass through 30 Russian cities including Moscow, Saint Petersburg, Kazan, Grozny and Vladivostock, before it arrives in Krasnoyarsk on March 1, the day before the Winter Universiade Opening Ceremony.

Tomorrow’s event is taking place here in Turin as it was here in the Italian city in 1959 that the first official Universiade was held.

The Torch from the original 1959 Games will be used to light the Krasnoyarsk flame during a Ceremony that will be attended by International Sports Federation (FISU) President Oleg Matytsin and the general director of the Krasnoyarsk Organising Committee, Maksim Urazov.

It will also feature a short relay of the torch from the University Rectorat to Valentino Castle of Polytechnic.

The Inernational Day of University Sport was formally proclaimed by UNESCO in 2015 and is described as a “unique platform for the exchange of ideas and development through university sport on a worldwide level".